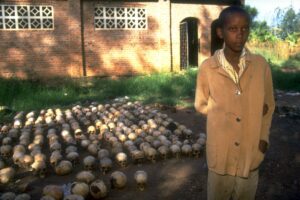 “We honour their memory. We stand in awe of the resilience of the survivors. And we reflect on our failures as an international community,” Secretary-General António Guterres said in a video message to a virtual event commemorating the 28th International Day of Reflection on the 1994 Genocide against the Tutsi in Rwanda.

He reminded the participants that the genocide was “deliberate, systematic – and carried out in broad daylight.”

On the International Day of Reflection on the 1994 #Genocide against the #Tutsi in #Rwanda, we remember that past because “Genocide involves all of humanity and that is why the transmission of its history is a collective responsibility.”.https://t.co/jBnk0iOuYb #Kwibuka pic.twitter.com/45R9wCplTy

The UN chief recalled that although no one who followed world affairs or watched the news, could deny “the sickening violence” taking place, too few spoke out and even fewer tried to intervene.

“Much more could have – and should have – been done. A generation after the events, the stain of shame endures,” he underscored.

Mr. Guterres reminded everyone that “we always have a choice” and urged them “to choose humanity over hatred; compassion over cruelty; courage over complacency; and reconciliation over rage.”

The Secretary-General then drew attention to the principle of Responsibility to Protect; his Call to Action, which puts human rights at the heart of the Organization; through the Special Adviser on the Prevention of Genocide, saying, “I have placed the agenda of prevention at the centre of our work”.

He also pointed to the whole basis of international criminal justice, which illustrates that “perpetrators can no longer assume impunity”.

“The remarkable work of the International Criminal Tribunal for Rwanda – the first court in history to convict an individual of genocide – was instrumental in this effort,” he said, “it has demonstrated how justice is indispensable for sustainable peace.”

“Rwanda today stands as a powerful testament of the human spirit’s ability to heal even the deepest wounds and emerge from the darkest depths to rebuild a stronger society”, he added.

He pointed out that after having suffered “unspeakable gender-based violence”, women in Rwanda now, hold 60 percent of parliamentary seats.

And Rwanda is the fourth largest UN peacekeeping contributor, which Mr. Guterres said was helping to spare others, “the pain they themselves have known.”

The genocide has raised fundamental questions about the role of the Security Council, the effectiveness of peacekeeping, the need to end impunity for international crimes, the importance of addressing roots of violence, and the fragility of civility.

The UN chief described Ukraine in flames; old and new conflicts festering in the Middle East, Africa and beyond – while the Security Council was agreeing “mostly to disagree”.

Wars are raging, “inequalities widening, and poverty growing, and all are breeding grounds of resentment, anxiety, and anger.”

“Meanwhile, we see hate speech – including dehumanizing disinformation, racist tropes, and genocide denial and distortion – proliferating both on and offline,” the UN chief continued, warning of “the dangers of intolerance, irrationality, and bigotry in every society”.

While looking back “with remorse,” the Secretary-General urged everyone to look ahead “with resolve” and commit to “be ever vigilant” and never forget.

“Let us pay meaningful tribute to the Rwandans who perished by building a future of dignity, tolerance, and human rights for all,” he concluded.

Rising from the ashes

During a candle-lighting ceremony, he urged the participants to “stand against racism, hate speech, xenophobia, and all forms of discrimination” and to let the light “burn brighter than the darkness of hate and violence”.

“Today, Rwanda has rebuilt from the ashes of horrific tragedy and destruction, evidenced by its economic, social and political developments,” he said.

“It laid the foundation for these achievements by having embarked on a better path; one of forgiveness and reconciliation, leaving behind past resentments and acknowledging the common humanity of all”.

Mr. Shahid honoured the survivors who “mustered the strength and courage to defy the odds,” saying that their bravery and resilience stand as “a beacon of hope for the people of Rwanda, and many more across the world”.

Rwandan-born Providence Umugwaneza, was 11 years old when the genocide began. She was the fifth child in a family of eight with parents, grandparents, uncles and cousins “a constant presence” in her life.

“We were a happy family until we weren’t. During the 1994 Genocide against the Tutsi, my family was mercilessly killed by the Interahamwe,” the notorious Hutu paramilitary organization, she said in her recorded testimony.

Ms. Umugwaneza recounted how as a child, she didn’t understand the distinction between Hutu and Tutsi until one day her best friend labelled her a Tutsi, because she was “tall and skinny and have a long nose.”

“That’s when I realized that slight physical variations made me different in the eyes of my Hutu classmates and teachers…[and] put me at risk”.

UNTV
Speaking at the Commemoration of the International Day of Reflection on 1994 Genocide Against the Tutsi in Rwanda, survivor Providence Umugwaneza bears testimony to the merciless killing of her family.

When she was old enough to read the lists posted outside each classroom stating students’ names, religions, and ethnicities, mild threats turned to violence.

The kids began taunting Ms. Umugwaneza that as a minority, it would not be hard to exterminate her “when the time comes.”

“I would not be here today if I had not travelled to my aunt’s house during Easter,” she said, explaining that she left to help care for her new-born cousin.

When it was time to go back home, news broke that the plane carrying the President was shot down, killing everybody on board.

“Within the next couple of hours, things changed quickly and for good,” the survivor continued.

“None of the kids, my uncles, and aunties escaped the killing that had been prepared for so long. In my extended family, no one survived. They were all completely wiped out. Only memories live”.

Click here to watch the ceremony in its entirety.