Aquaculture, or fish farming, is one of the fastest growing food-production sectors in the world, according to the Food and Agriculture Organization (FAO), reaching an all-time record high of 114.5 million tonnes in 2018. Asian countries continue to account for the vast majority of farmed fish production, some 90 per cent over the last two decades and, since 2016, aquaculture has been the main source of fish available for human consumption.

Overfishing of wild fish is an ongoing problem, and the FAO warned in its 2020 World Fisheries and Aquaculture report, that the status of fish stocks are deteriorating: around 30 per cent are not within biologically sustainable levels, and some 60 per cent are at near capacity.

Aquaculture is expected to further dominate the seafood market in the coming years and, in the same report, the FAO declared that it could have a transformational impact on the way we feed the global population, if it is managed sustainably.

Wenche Grønbrekk is the chairperson of the United Nations Global Compact Local Network for Norway, a group of private companies that have agree to work towards the UN’s Sustainable Development Goals (SDGs).   She is also an executive at salmon farming company Cermaq, which is based in Norway, Chile, and Canada. She says that the amount of seafood currently farmed could, in fact, be sustainably increased six-fold, given the right conditions.

However, she acknowledges that environmental challenges persist. The detrimental effects of aquaculture include the destruction of marine habitats, the use of harmful chemicals and veterinary drugs, and the production of waste.

“The farmed fish industry is still relatively young and, despite the bad reputation it has had, it has developed a lot. Today, it has a strong focus on sustainability, and salmon farming, for example, is the most technologically advanced form of aquaculture. I’ve been encouraged to see that there is a real will to lift standards in the industry, and an understanding that, by working together on sustainable development issues, we will all benefit.”

Cermaq is a founding member of Seafood Business for Ocean Stewardship (SeaBOS), an industry group that is supporting the UN Global Compact’s Sustainable Ocean Business Action Platform, which promotes the central role that seafood has to play in feeding the growing world population.

Martin Exel, the managing director of SeaBOS, agrees that the aquaculture sector only has itself to blame for the reputation it has acquired. “We have had some bad actors, who have done the wrong things and, frankly, broken the rules”, he says. Nevertheless, he is confident that the industry is moving in the right direction:

“SeaBOS brings together some of the biggest companies in the industry, and we’re having frank discussions about the challenges we face. These include climate change impacts, illegal, unreported and unregulated (IUU) fishing, modern slavery, the removal of ocean plastics, and how to reduce the use of antibiotics in aquaculture, especially those that are critical for human health.”

According to Mr. Exel, the seafood companies in SeaBOS understand the importance of environmental and economic sustainability, which includes looking after the people working in the business, and gaining the trust and respect of the community, and consumers. 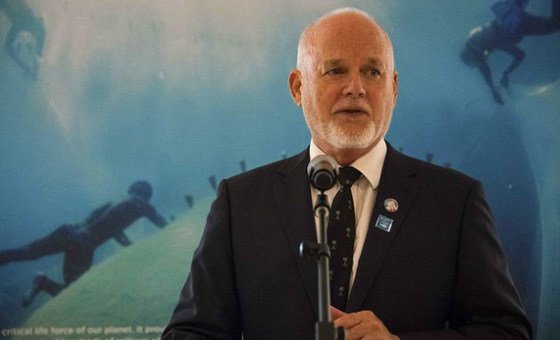 “The fact is that aquaculture is the best way to help feed some 10 billion people in the coming years”, says Mr. Exel. “It can be scaled up in a healthy and sustainable way, which is why our members are working closely with scientists to advance the technology that will ensure that we can effectively solve the food productions challenges that we are all facing.”

Peter Thomson, the UN Secretary-General’s Special Envoy for the Ocean, is confident that, if managed properly, the Ocean will play a major role in ending hunger worldwide.

“Through the development of new forms of sustainable aquaculture with appropriate species and feeds, mariculture (the farming of organisms in marine environments), shellfish farming, and much greater attention to macroalgae (seaweed) for human and animal food, the Ocean will provide us with a large proportion of the nutritious food we need.”

Hunger, the Ocean, and the UN