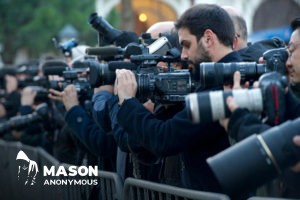 No democracy is complete without access to transparent and reliable information, said António Guterres, describing unfettered journalism as “the cornerstone for building fair and impartial institutions, holding leaders accountable and speaking truth to power.”

Yet, they took the risk and always stood up for #FreedomOfExpression. For justice. For democracy. For you.

Never give up on the fight for #PressFreedom!

This years commemorations which began on Thursday across the world, are focussing on the powerful role that good reporting plays in championing democracy and free elections, when disinformation is becoming a larger problem in even the world’s oldest and most sophisticated democratic systems.

“Facts, not falsehoods, should guide people as they choose their representatives”, said the UN chief, noting that “while technology has transformed the ways in which we receive and share information, sometimes it is used to mislead public opinion or to fuel violence and hatred.”

Mr. Guterres said he was “deeply troubled by the growing number of attacks and the culture of impunity…When media workers are targeted, societies as a whole pay a price.”

The head of UNESCO, Audrey Azoulay, said in her message for the day that it was essential to “guarantee freedom of opinion through the free exchange of ideas and information, based on factual truths.”

She said societies which value a free press, needed to “constantly vigilant. We must act together to protect the freedom of expression and safety of journalists”.

A free media is a “prerequisite” for the proper functioning of democracies, she added: “Independent journalism provides an opportunity to present facts to citizens and to form an opinion. Press freedom guarantees transparent societies where everyone can access information”.

Among the commemorative events that got underway on Thursday, were a global conference on “Media for Democracy, Journalism and Elections in Times of Disinformation” in the Ethiopian capital Addis Ababa, jointly organized by the Government and the African Union Commission, together with UNESCO; and a conference in the Lebanese capital Beirut, on the same theme, organized by the local UNESCO office in partnership with the Ministry of Information.

A high-level event takes place at UN Headquarters in New York on Friday where the Secretary-General and President of the UN General Assembly are due to speak, followed by an expert roundtable