“In the wake of years of conflict, and since the takeover by the Taliban in August last year, the country has been plunged into a deep economic, social, humanitarian and human rights crisis,” said High Commissioner Michelle Bachelet.

She admired the courage of Afghan women in demanding their inalienable rights while facing a “critical” situation under increasingly repressive Taliban codes of conduct. 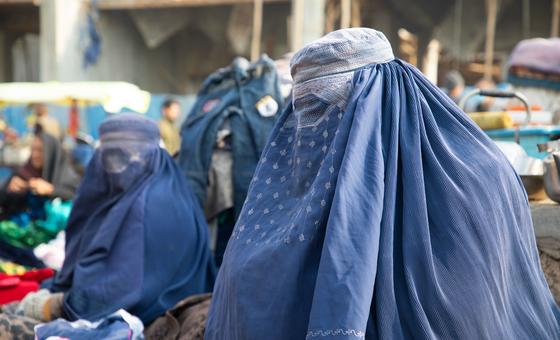 Ms. Bachelet cited a school ban affecting 1.1 million secondary school girls as well as other decrees, such as enforcing a strict hijab rule; barriers for women’s access to employment – including for female NGO workers – barring women from taking part in public and political life; and severely restricting their freedom of movement, affecting their access to health services, livelihood and humanitarian aid.

“Let me be clear: what we are witnessing today in Afghanistan is the institutionalized, systematic oppression of women,” the High Commissioner spelled out.

Afghan women are rapidly facing the worst-case scenario many feared.

Despite having ratified international treaties, including the Convention on Elimination of All Forms of Discrimination Against Women, the de facto authorities are far from complying with their international obligations.

“I call on the de facto authorities to honour their commitment to women’s rights, to urgently create a meaningful dialogue with Afghan women, and to listen to their voices,” she stated.

The senior UN official raised concern over the general amnesty granted to former officials and security forces, noting that the Human Rights Service of the UN Assistance Mission in Afghanistan (UNAMA) continues to receive credible reports of arbitrary arrests and detention, ill-treatment and extra-judicial killings – particularly of those associated with the former democratic Government and its institutions.

"Let me be clear: what we are witnessing today in #Afghanistan is the institutionalized, systematic oppression of women," she said. pic.twitter.com/NojvOfnigO

UNAMA also continues to record the impact of attacks on civilians, including in schools, at markets and on public transportation networks.

“Ethnic and religious minorities have also been directly attacked. I remind the de facto authorities of their responsibility to protect all Afghans subject to their control,” she stated.

Ms. Bachelet also expressed concerned over alleged human rights violations and abuses against civilians in the northern provinces, including arbitrary arrests, extrajudicial killings, and torture, calling on all parties to the conflict to “observe restraint and to fully respect international human rights law”.

And despite Taliban authorities’ repeated commitments to respect human rights, civic space has shrunk rapidly and dramatically since their return to Kabul.

“Restrictions on freedom of opinion and expression, the right to peaceful assembly, and the right to participate in public affairs have all had a chilling effect on individuals and communities,” reminded the rights chief.

Meanwhile, humanitarian and economic crises continue to have a devastating impact on all Afghan lives.

Amidst mounting unemployment, 93 per cent of all households face a high level of food insecurity with devastating impact on female-headed homes, aged persons, people with disabilities, and children.

And access to basic services, including healthcare, is also diminishing.

According to the World Health Organization (WHO), some 18.1 million people are in need of health services, including 3.19 million children under five.

“Compounding all of this is the glaring absence of functioning national mechanisms to monitor human rights violations, severely limiting the ability to provide basic protection for the Afghan people,” said Ms. Bachelet.

“I urge the establishment of an independent human rights mechanism that can receive complaints from the public, and which can bring problems and solutions to the attention of the de facto authorities,” the High Commissioner said.

She assured that UNAMA will continue to work with the de facto authorities to promote and protect human rights for all the Afghan people, documenting human rights abuses, outlining rights trends, raising individual cases, and advocating for accountability.

IOM 2021/Paula Bonstein
Some 83 percent of Afghan nationals over 18 years old are unemployed. With the lack of a basic income and the ongoing rise in food prices, access to food has become the most pressing concern for displaced persons in Afghanistan.

The UN rights chief reiterated some points that she had made during and following her visit in March, beginning with the need to move society towards peace.

“The representation of all Afghans in policy and decision-making processes will be crucial” to this end and require “listening to the voices of women and girls” as well as “heeding the calls of religious and ethnic minorities,” she outlined.

She maintained the need for “concerted work by the de facto authorities, renewed space for civil society and support by the international community” to uphold human rights for everyone in the country.

“Let us all commit – with urgency – to make this happen,” the High Commissioner concluded.