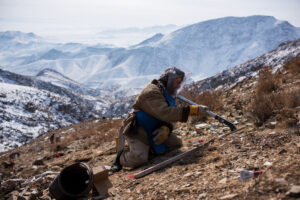 Ten people were killed, and 16 others injured, when gunmen burst into a demining camp in Baghlan-e-Markazi district and opened fire.

HALO Trust said the attack occurred around 9:50 pm Tuesday, local time, when some 110 men, from local communities in northern Afghanistan, were in the camp after finishing their work on nearby minefields.

In strongly condemning the attack, UN Spokesperson Stéphane Dujarric said the HALO Trust is a global partner in operations to clear landmines, and other explosive devices, and to better the lives of vulnerable people.

“We send heartfelt condolences to the families of the deceased, and we wish for a speedy and full recovery to the injured”, he said, during his latest media briefing in New York.

“We further call for a full investigation to ensure that those responsible for this horrendous attack are held accountable and brought to justice.  The United Nations is committed to staying and delivering in Afghanistan.”

Dr. Ramiz Alakbarov, UN Resident and Humanitarian Coordinator in Afghanistan, echoed the call for an investigation.

“It is repugnant that an organization that works to clear landmines and other explosives and better the lives of vulnerable people could be targeted”, he said in a statement.

Since 1989, more than 40,000 Afghans have been killed by landmines and other explosive remnants of war, according to data from the UN Mine Action Service (UNMAS).  Last year it helped the country to clear some 14 square kilometres of land.

“UNMAS is outraged by and condemns in the strongest terms the attack on humanitarian deminers last night in Afghanistan,” the agency said in a post on Twitter.

“We are dismayed and saddened for the victims, their families, and the terror inflicted on the survivors.”

The UN mission in the country, UNAMA, also took to Twitter to condemn the attack, describing it as “deeply shocking”.

UNAMA stated that warring parties “have a fundamental responsibility to safeguard humanitarians in the areas they control. Yet it is clear that certain parties and people within their ranks are deliberately targeting them.”

The mission added that “all those parties claiming to desire peace for the Afghan people need to demonstrate concrete action to support their claims and put an end to the terrible crimes such as witnessed in Baghlan”.

The UN has underlined its commitment to staying in the country, where aid workers, particularly women, are facing increased attacks and harassment.

Mr Dujarric reported that 11 were killed, 27 injured and 36 abducted, between January and April of this year.

“Our humanitarian colleagues warn that interference with humanitarian activities escalated in 2020, with a 140 per cent increase in incidents compared to 2019. This escalating trend continues in 2021”, he said.

He urged parties to the conflict to protect civilians, aid workers and civilian structures such as schools and hospitals, in line with international humanitarian law.