Lourena Gboeah began by describing how she and her four-year-old daughter, Moriah, read stories together, particularly ones that honour the contributions and sacrifices of African Americans, and their role in shaping the country.

Most recently, they have been focusing on picture books by African American authors, like Floyd Cooper who wrote and illustrated Moriah’s favourite, Max and the Tag-Along Moon, about a boy and his grandfather.

“We read books based on self-love, so that as she grows, not only does the reading enhance her vocabulary, but it also helps her to just appreciate and love herself even more,” said Lourena. 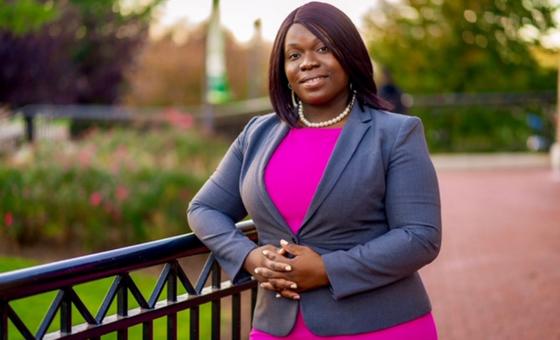 For many US refugees of African descent, Black History Month provides an opportunity to reflect on both the journey that forced them to flee their homelands, and their new lives in America.

And having the first African American appointed to the highest court in the land, is a shot in the arm of hope for a prosperous future.

“When we talk about being a Black woman here in America, especially for me, being a former refugee, I always think about how hard I had to fight to get to where I am today,” said Lourena, a social worker and chair of the US-based advocacy group Refugee Congress.

As a young girl in Buchanan, Liberia, the naturalized American enjoyed watching soccer games and traditional dance performances on Sundays in the park there.

But after the First Liberian Civil War broke out in 1989, her life quickly changed.

The joyful shouts at pick-up games were replaced by gunshots during massacres carried out by the warring sides. Those who dared to continue dancing were seen by rebels as being supportive of opposition forces, and so they, too became victims.

“We were getting really terrified,” said Martha Gboeah, Lourena’s mother, who escaped with her eight children after rebel groups threatened the family.

Lourena, her mother and siblings, were among 750,000 people who fled their homes during the war that claimed hundreds of thousands of lives.

The family first crossed the border to Côte d’Ivoire, where they lived for two years, before being resettled in 1992 to Staten Island, New York City, where they were reunited with the family patriarch.

Then four years old, Lourena marvelled at the idea of sandwiches made of ice cream. And her mother found joy in working and taking care of her family.

“The first thing that was really amazing was to have work,” Martha said. “In Liberia, women [couldn’t] just get a job. Here, I was able to work and move around freely.”

But soon the family also learned the reality of being Black in America.

“We went through being called names. We would get teased that we lived in huts, and it was just really like a lack of cultural awareness at that time,” Lourena said. “I still remember that to this day. We all went through that bullying.”

Years later, while working for the Jewish Family Services of Delaware resettlement agency, she taught young children in Delaware schools about refugees.

Lourena credited a growing emphasis on cultural awareness education with contributing to changing how refugees and other marginalized groups are perceived – but maintains that there is still a lot to be done.

As a Black woman, Lourena said that navigating the US workforce has proven difficult.

Despite having the necessary qualifications and experience, she has had to fight for career opportunities and a fair salary.

While Lourena, unlike some of her counterparts, has never been “tapped on the shoulder for positions,” she acknowledged that “it really excites me when I’m able to help someone.”

I like to pride myself in being a connector of people, places, and things –  Refugee advocate

According to a 2021 analysis by the Brookings Institution research group, the situation in the US job market for Black women continues to be difficult.

One study by Leanin.org and McKinsey & Co. found that women of colour in the US workplace face a wider range of microaggressions and must put in more hours to prove their value.

Chairwoman of the board

In addition to her job as a social worker, she serves as the Board chair for Refugee Congress and as a Board member for Refugee Council USA – another US-based advocacy organization that helps people forced to flee their homes because of war or persecution.

Lourena and her counterparts speak at public events, conduct community training and advocate with local and state governments, encouraging policies and practices welcoming to refugees.

“I like to pride myself in being a connector of people, places, and things,” she said. “It really excites me when I’m able to help someone find a solution to whatever challenges that they’re going through.”

As a senior community engagement manager at Unite Us, a network that coordinates community-based organizations, she helps to ensure that health and social care services reach those in need.

“One thing I will remember Lourena for is her conscientious fight to advocate for those who lack awareness and resources,” said Alyssa Bradley, a former colleague.

“If you need a voice or hand, Lourena willingly and strongly lends hers”.

Lourena draws on her family’s experience as refugees in her work.

“We’re hardworking people,” she said. “But of course, coming into a totally new land, any type of extra support would have been helpful.”

Lourena feels a particular obligation towards Black women and hopes she can make the future bright for her daughter, who wants to be an astronaut.

She has taken Moriah to Refugee Congress meetings and to a Black Lives Matter demonstration, hoping that the experiences will teach her daughter to value her worth and power.

“I don’t want her to think any less of herself because of her skin color,” Lourena said. “And I want her to know that her mom was in this fight.”