For the group of World Urban Forum (WUF10) delegates looking on, it was a no-brainer. Soon they were whizzing down the green, segregated bicycle lane that hugs the sea along the corniche in Abu Dhabi.

“We’re here today to unveil this piece of art which is part of our cooperation between UN-Habitat and the city of Abu Dhabi”, said Christine Knudsen, of the UN’s human settlements and sustainable urban development agency.

“It is to leave a legacy, carrying forward the memory of the 10th Session of the World Urban Forum.” This is the first time the world’s largest sustainable urbanization forum has been held in the Arab region. 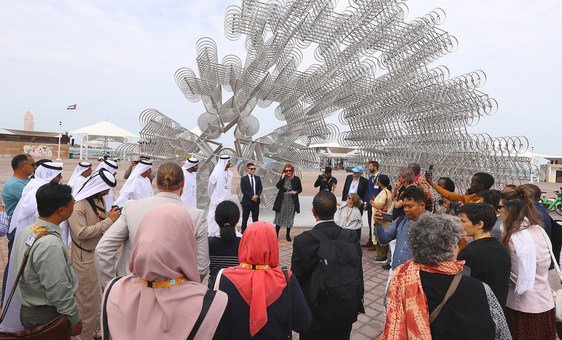 The new public art sculpture, called “Forever Bicycle” by famed Chinese artist and activist, Ai Wei Wei, consists of 720 carefully stacked bicycles. The repetitive clean lines create an optical illusion, and a magnet for your eyes. In fact, it can be a little dizzying when approached straight on.

“Today, under the For Abu Dhabi Initiative and other municipality efforts, we are building hundreds of cycling lanes here within the city”, elaborated Salem Al Junaibi, from the Abu Dhabi Department of Municipalities and Transport.

“We have approximately 400km of cycle lanes that we are putting here in Abu Dhabi island. These will be spread out all across the city, as a means of getting people from point A to point B, wherever that may be.”

The public art piece was specifically loaned for the World Urban Forum. “This is a wonderful opportunity to showcase how we look at public space, urban mobility, and public artwork, to draw communities together, to create safer and more comfortable areas where communities can interact.” contextualises Ms. Knudsen.

“This is part what we are trying to achieve with the World Urban Forum and our work in UN-Habitat, to create safe, sustainable and resilient cities.” As she speaks behind her residents take selfies between the silver bike frames of the sculpture, and a cheerful cyclist whizzes by. “Our legacy will carry forward with the people of Abu Dhabi.”

The World Urban Forum has progressively grown from its First Session at UN-Habitat’s headquarters in Nairobi, Kenya in 2002 which had just over 1,000 participants, to become the world’s premier meeting on sustainable urbanization.

The Tenth Session of the World Urban Forum (WUF10) officially opened at the Abu Dhabi National Exhibition Centre last Saturday, with over 12,000 attendees, and will run until 13 February.

The Conference is available to a global audience via live and on-demand streaming coverage, on our UN Web TV website.