Speaking in Geneva, after returning from a four-day tour of war-ravaged Ukraine this week, Volker Türk confirmed that he had been forced to take shelter in a bunker during a shelling attack.

His experience was what Ukrainians and UN colleagues, encountered “on a regular basis”, the High Commissioner said, before insisting that he read nothing more into the incident, other than the fact that “it is a war that needs to stop”.

Even where the challenges seem intractable, if leaders would only centre their responses on human rights, the solutions will be always within sight. UN Human Rights Chief @volker_turk briefs the press on global human rights issues ahead of #HumanRightsDay: https://t.co/HPm2IhfSRz https://t.co/KnMGhJhTKs

Quoting from the Universal Declaration of Human Rights, which was adopted by the UN General Assembly 74 years ago to prevent the horror of two world wars from being repeated, Mr. Türk insisted that it was the “disregard and contempt for human rights” that “have resulted in barbarous acts which have outraged the conscience of mankind”.

In a message of hope, he continued that “even where the challenges seem intractable, if the leaders in politics and society would only centre their responses on human rights, the solutions will be always within sight”.

Sudan and Haiti in spotlight

This was true in Sudan, the head of OHCHR said, “where civil society, led particularly by women and young people – have changed the equation on the ground, challenged society to move and evolve for the better, with more liberties”.

Emphasising the need to focus on other crises than those which dominate the headlines, Mr. Türk explained that the desperate situation in Haiti “cannot be ignored”.

Armed gangs, “reportedly supported by economic and political elites, control more than 60 per cent of the capital”, Port-au-Prince, the UN rights chief said.

This catastrophic status quo has continued, despite the fact that 4.7 million face acute hunger, and that 1,448 people have been killed, 1,145 injured and 1,005 kidnapped by gangs since the beginning of the year.

“Remember that behind each of these numbers are entire families and communities that are torn apart by the violence,” said Mr. Türk, who added that sexual violence is also used by gangs “to instill fear and exert control over the population” according to the Human Rights Service of the UN Integrated Office in Haiti (BINUH).

“The root causes of the crisis, especially social inequalities, rampant corruption, collusion between powerful elites and gang leaders, and endemic impunity, must be addressed,” he said, adding that it was “unconscionable” that people benefited from the suffering of Haitians.

To all those who would threaten Haiti’s peace, security and stability, the High Commissioner maintained that Security Council sanctions and the arms embargo against Haiti’s “elites” who reportedly support its gangs, “send a very strong message” to them that such actions must stop. 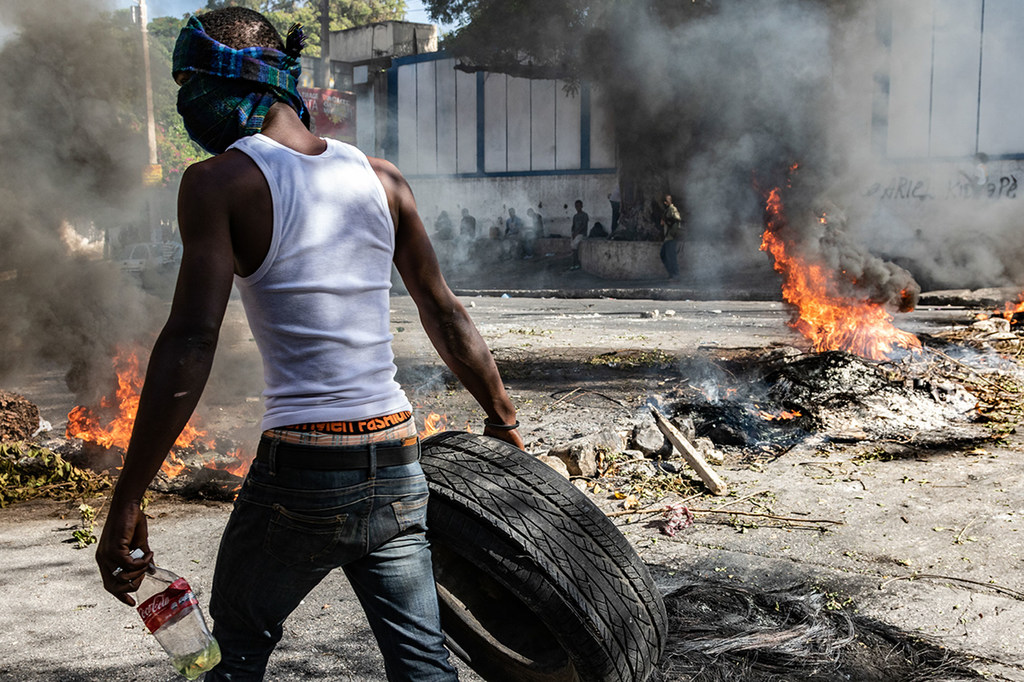 © UNICEF/Roger LeMoyne and U.S. CDC
People are protesting on the streets of Port-au-Prince in crisis-torn Haiti.

On Yemen, where violence between the government and Houthi-backed forces flared more than seven years ago, Mr. Türk explained that although large-scale hostilities and airstrikes had “generally stopped”, reports of civilian casualties had not, “especially of children near the frontlines due to landmines and other explosive remnants of war”.

On Afghanistan, the High Commissioner rounded on the de facto authorities’ decision to carry out lashings and executions in public, and the “systematic exclusion” of women and girls from virtually all aspects of life (which) is unparalleled in this world”.

Such actions were “in flagrant violation” of Afghanistan’s international human rights obligations, Mr. Türk continued, before urging the Taliban to establish an immediate moratorium on future executions and to abolish the death penalty.

On Mozambique, where civilians continue to be displaced, killed and subjected to sexual attacks by extremist militia, five years after the start of the conflict in Cabo Delgado, Mr. Türk insisted that the conflict could only be resolved by addressing its root causes.

This will require “protecting economic and social rights, preserving civic space, ensuring access to justice and prioritising young people and women in socio-economic development and decision-making, including – and that’s very important in this context – on the use of natural resources that directly affect their lives,” the UN rights chief said.

The situation in Somalia was another distressing human rights emergency that needed all the world’s attention, Mr. Türk continued.

After the worst drought there in decades and extremist attacks, the country “faces a humanitarian catastrophe”, he said. At the same time, UN rights officers have documented a steep rise in civilian casualties – “76 per cent of which are attributed to Al-Shabab” extremist militia, the High Commissioner said.

According to UN human rights office data, 672 people have been killed in Somalia and 1,082 injured from January to November, a worrying 51 per cent higher than during the same period last year.

© WFP/Kevin Ouma
Conflict and drought have led to food shortages in many parts of Somalia.

Asked about China, which rejected the findings of a hard-hitting UN rights office report on the treatment of minorities in Xinjiang this summer, the High Commissioner insisted that it had highlighted “very serious human rights concerns”.

“My focus is on following up on the recommendations that are contained in the report and for me it is also very key; of course we will – and I will personally continue engaging with the authorities,” Mr. Türk said, adding that “hope springs eternal for changes”.

To mark the 75th year of the adoption of the Universal Declaration of Human Rights (UDHR), Mr. Türk announced a year-long campaign “to recall the consensus this Declaration envisaged”.

The initiative will be coordinated by the Office of the High Commissioner with partners and involve activities, actions and “ways to renew people’s awareness of and commitment to human rights, especially among young people”.

One of the aims is “to rekindle the spirit, impulse and vitality that forged the UDHR 75 years ago and to rejuvenate a worldwide consensus on human rights – one that unifies us in the face of so many challenges”, Mr. Türk explained.

Even where the challenges seem intractable, if leaders would only centre their responses on human rights, the solutions will be always within sight. UN Human Rights Chief @volker_turk briefs the press on global human rights issues ahead of #HumanRightsDay: https://t.co/HPm2IhfSRz https://t.co/KnMGhJhTKs