Addressing a debate on cooperation between the two international organizations, Secretary-General António Guterres credited UN political missions and peacekeeping operations in supporting an array of activities, from a ceasefire agreement in Libya to an AU Military Observer Mission in the Central African Republic; and a truce in South Sudan that has generated “cautious optimism” across the country.

Secretary-General @antonioguterres today briefed the Security Council on @UN – @_AfricanUnion cooperation. "We need a renewed multilateralism," he said, counting on the #AU to help lead the way. Full remarks:https://t.co/Avw3e3ABvu pic.twitter.com/W8pfuCSJWh

“Our two Organizations also worked with the Economic Community of West African States in Côte d’Ivoire and Guinea, before and after elections, and joined efforts to facilitate in September the establishment of the 18-month transition in Mali”, he detailed.

Despite these positive steps, “challenges loom large”, the UN chief stated, citing new conflicts, a raging climate emergency and the COVID-19 pandemic, which is “exacerbating fragilities”.

Moreover, trust – which “underscores the importance of good governance and respect for human rights” and is “crucial to peace and security” – is being eroded.

Against the backdrop of growing restrictions in civic space and increasing threats to minorities around the world, he underlined that “dealing with the pandemic must not take attention away from maintaining peace and security”.

Mr. Guterres also pointed to terrorists exploiting the pandemic across the Sahel and in the Lake Chad Basin, reminding that African peace operations have Chapter VII authorization.

He reaffirmed his “full support” to AU-led initiatives for solving grievances through dialogue, and repeated his appeal for a global ceasefire, and for nations to joint together instead to fight COVID-19.

The top UN official advocated for trust building between the two organizations along with stronger collaboration among the UN Security Council and the AU Peace and Security Council.

To foster resilience and prepare for future challenges, more inclusive and effective institutions must be built “to prevent conflict, reinforce good governance and boost service delivery”, he said, adding, “in short, we need a renewed multilateralism”. 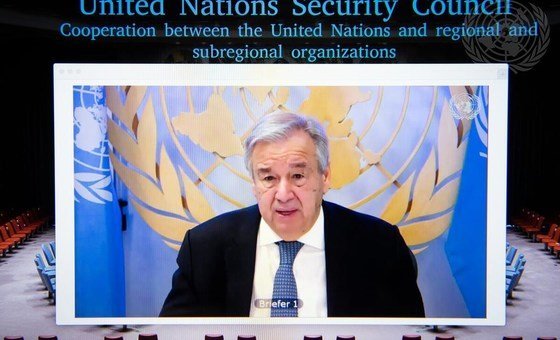 The Secretary-General concluded with a quote from Nelson Mandela: “It seems impossible until its done”.

The Chairperson of the African Union (AU) Commission, Moussa Faki Mahamat, lauded the leadership in the Council of the A3 +1 –  namely Niger, Tunisia, South Africa and Saint Vincent and the Grenadines – and noted that UN-AU cooperation is a “prerequisite” for progress on Africa-led, peace and security across the continent.

He attested that “shared values” help guide the way forward, stressed that global challenges require the international community’s support and advocated for increased “operational coordination” on peace processes as well as for the Silencing the Guns Initiative.

In closing, he urged for “burden sharing” on peace and security to include the predictable financing for AU-led or authorized peace support operations.

Matamela Cyril Ramaphosa, President of South Africa – which also holds the Council presidency this month – said he was honoured to jointly serve on the Council and chair the AU, as it provided a unique perspective on UN-AU cooperation with Africans taking responsibility for “complex challenges”.

Pointing out that the peace-development nexus is clear to most African leaders, he urged expedited deliberations on funding for African-led peace operations, with prospects looking positive in some settings, while maintaining that silencing the guns and eliminating illicit financial flows are part of the same large stabilization agenda.

However, President Ramaphosa identified worrisome humanitarian needs linked to both ongoing conflict and the spread of the pandemic, calling for solidarity to address multiple threats, successfully and inclusively.