With thousands poised for freedom, UN Special Envoy Martin Griffiths told an in-person meeting of the Security Council that “some say, it may well be the largest such operation of this kind in the history of prisoners release”.

This comes following a week-long meeting that concluded on 27 September in Switzerland, where the conflict parties reached an agreement to release the first group of detainees.

I warned the Security Council today that the window to prevent famine in #Yemen is closing quickly. Funding is up somewhat, but we still have a long way to go to prevent suffering. My remarks: https://t.co/CiWQDgUJWj pic.twitter.com/em6DbAzh8G

The UN official thanked everyone involved with the move, especially “the parties and their respective leadership for their commitment to constructively negotiate and successfully reach this agreement”.

As the current prisoners’ agreement did not include many thousands of other detainees, Mr. Griffiths informed the Council that the parties would again convene to discuss more emancipations, in line with the 2018 commitment they made in Stockholm “to release all conflict-related prisoners and detainees”.

“We hope that the implementation of the prisoners’ agreement will build confidence and momentum by demonstrating that peaceful dialogue can deliver”, upheld the UN envoy.

Painting a picture of negotiations conducted through ‘shuttle diplomacy’ during a global pandemic and amid a raging war, the Special Envoy informed the 15-body organ that he was “neither surprised nor discouraged” that the internationally recognized Government and Ansar Allah have yet to agree on a Joint Declaration ending the war and opening the gateway to peace.

He reminded the Council that the negotiations had been conducted as a result of the UN Secretary-General’s call for a global ceasefire, and then his subsequent call for ceasefire in Yemen.

Explaining that the Joint Declaration is an “ambitious set of agreements” covering a nation-wide ceasefire, economic and humanitarian measures and the resumption of the political process, Mr. Griffiths understood why the parties are taking their time, saying, “we are asking a lot from the parties”.

However, against the backdrop of a thriving war economy, eroding State institutions, increased interference and conflict actors fragmenting and multiplying, he stressed the need for the parties to “act with urgency to conclude the Joint Declaration”.

“The longer this conflict goes on, the harder any of this will be to reverse”, the Special Representative attested.

Turning to the aging Safer oil tanker – that has had virtually no maintenance since 2015 and threatens catastrophic consequences for Yemen and the region should there be a major oil spill, explosion or fire – Mr. Griffiths reiterated that the UN be granted permission to assess and undertake urgent initial repairs.

And as Yemenis continue to suffer from rising prices, interrupted services, education disruptions and violent attacks on female human rights, the Special Envoy implored the UN and international community to help the country find “a just, honorable and sustainable peace”.

A closing window to stop famine

In his briefing, Emergency Relief Coordinator Mark Lowcock warned that “the window to prevent famine in Yemen is closing”.

Citing food security data, he revealed that the worst hunger is concentrated in areas affected by the conflict.

Moreover, with only 42 per cent of the country’s Humanitarian Response Plan funded, aid agencies have had to slash assistance to four million people since the year began.

As harassment by armed groups and other insecurity have left front-line humanitarian staff in crosshair, Mr. Lowcock spelled out: “the crisis urgently needs a political solution” to “help move the country back from the edge of famine”.

At the same time, the faltering economy – a key famine risk-factor determinant –has rendered food and other basic goods out of reach for millions.

He also updated that currently, there are 47 active front lines across Yemen – “the most ever recorded”. 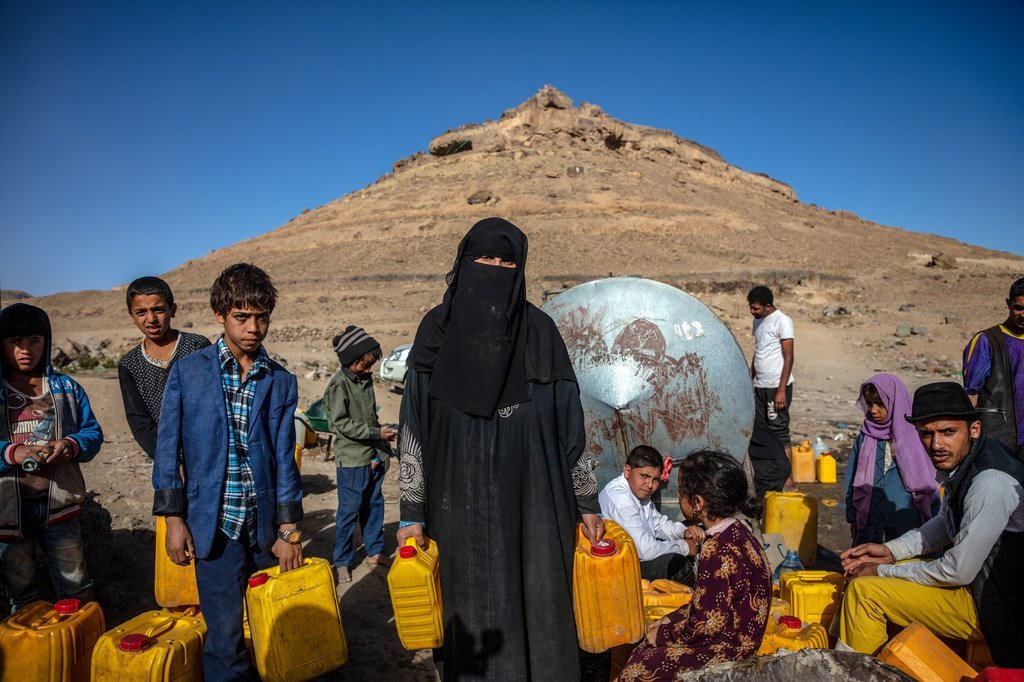 UNDP Yemen
Wells are going dry and the rising cost of basic items leaves the option of buying critical items, like food and clean water, out of reach for millions in Yemen.