The recommendation, made in a resolution adopted by acclamation in a private meeting, now goes to the 193-member General Assembly for formal approval.

In a statement, Mr. Guterres said it was “a great honour” to be selected, and thanked ambassadors serving on the Security Council for placing their trust in him. “My gratitude also extends to Portugal, for having nominated me again”, he added.

“It has been an immense privilege to be at the service of ‘we, the peoples’ and at the helm of the amazing women and men of this Organization for the past four and a half years, when we have been facing so many complex challenges”, said the UN chief.

“I would be deeply humbled if the General Assembly were to entrust me with the responsibilities of a second mandate.”

It has been an immense privilege to be at the service of ‘we, the peoples’ and at the helm of the amazing women and men of this Organization

Under procedures for appointing the world body’s new chief, after the recommendation is transmitted from the Security Council to the General Assembly, a draft resolution is issued for the Assembly to take action. After appropriate consultations with Member States, the Assembly President fixes a date for the draft to be taken up.

Mr Guterres circulated his vision statement for a second five-year term in March, and in early May he took part in an informal interactive dialogue at UN Headquarters. 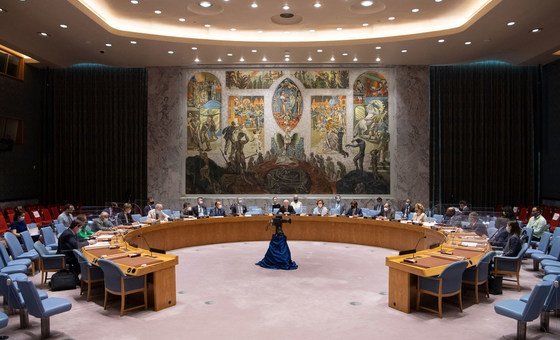 The UN Security Council meets to discuss its recommendation for the appointment of the United Nations Secretary-General., by UN Photo/Eskinder Debebe

The informal dialogues were introduced during the last selection process in the UN General Assembly, with the idea of allowing candidates to present their views and take questions from a wide range of representatives of the global community, including civil society, establishing a new standard of transparency.

The last six proceedings for selecting the Secretaries-General were appointed by the Assembly through a resolution adopted by consensus.

A vote will take place only if a Member State requests it and a simple majority of those voting would be required for the Assembly to adopt the resolution. But the Assembly could decide that the decision requires a two-thirds majority. If a vote is taken, it will be by secret ballot.

The UN Charter, signed in 1945 as the foundation of the Organization, says relatively little about how a Secretary-General is to be selected, aside from Article 97, which notes that the candidate “shall be appointed by the General Assembly upon the recommendation of the Security Council.” At its first session in 1946, the General Assembly was much more active in the selection process.

It created resolution A/RES/1/11 determining that the Council take the lead in the selection process, agree on a single name in a private meeting, and pass that name down to the General Assembly for a vote.