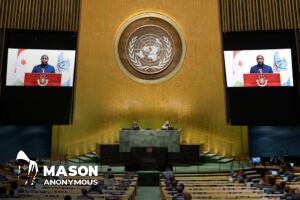 Warning of a “trend” that has seen States imposing coercive unilateral measures against other States, the Burundi leader strongly rejected diplomatic aggression against his country by foreign Governments.

He also alleged that political forces are behind Burundi’s inclusion on the agenda of the UN Security Council, which, he said had destabilized rather than helped the country, calling for its prompt removal.

President Ndayishimiye also called for addressing the relations between African countries and those with a colonial past, adding that “shaking off the colonial yoke” has cost millions of lives and left wounds that are difficult to heal.

With development being the “backbone of progress”, he said broad efforts are being made to foster achievements. With stability across the country, initiatives are now focused on citizens returning home, with 92,000 refugees having been repatriated, added the President.

“This planet is facing a climate crisis, worsening daily and threatening decades of progress. The clock is ticking,” he said, emphasizing that Burundi launched a national project to reduce deforestation.

Burundi is also fighting against terrorism, President Ndayishimiye told world leaders, adding that the scourge should never be linked to religion or ethnic origin.

Instead, its root causes must be addressed, he said, adding that Burundi has deployed 5,000 troops to the peacekeeping mission in Somalia.

Commending the Secretary‑General for his reform efforts, the President of Burundi said the United Nations must be strong to face current challenges.

He said this General Assembly session is an excellent opportunity for Member States to reflect on how the UN must address global challenges and for adopting a consensus-based approach to tackle global issues, from migration to climate change.

Echoing the common African position on Security Council reform, he called for permanent seats to be allocated to the continent’s countries.

While the pandemic has highlighted fragilities in the world, he said Burundi believes in international solidarity and will play its full role in building a global order that respects the UN Charter.