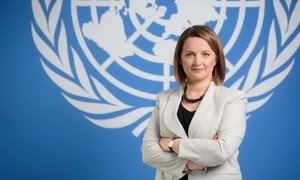 For the UN, as for all international partners of Belarus, the scale of protests and the level of repressions were a big surprise.  This is the first time that the country, which has been very stable and where people are generally quite reserved in terms of expressing their political views, is seeing an election contested to this degree.

What is also unprecedented is the intensity of repressions against demonstrators and journalists.  About 13,000 people were arrested over the last eight weeks, most of the detentions taking place in the first week after elections.  This will go down in the history books as something that never happened before in Belarus.

Another unexpected phenomenon was the social mobilization and the use of technology that allows people to communicate and coordinate their protests in real time.  Social media and mobile internet are changing the way political activism happens. More and more people are expressing themselves and organizing online.

Kseniya Golubovich
Since August 2020, Minsk and other cities in Belarus have seen mass protests with many calling for an end to excessive force used by the police.

The role of the UN is to promote international norms and standards, and advocate for the respect of universal human rights.  The UN reacted immediately, to remind the state authorities of their international obligations: torture and other cruel, inhuman and degrading treatment are absolutely prohibited and can never be justified.

From the beginning of the crisis, the UN Secretary General, the UN High Commissioner for Human Rights, and myself as the UN representative in the country, have issued a number of official statements and urged the authorities of Belarus to respect the right to peaceful assembly and expression.

Facing the mass detentions of over 7,000 people in the week following elections, and allegations of torture in prisons, the UN urged the authorities to release everyone who had been detained for exercising their human rights, to stop torture and other forms of ill-treatment of detainees, investigate all cases of human rights violations, and clarify the fate and whereabouts of any individuals reported as missing.

With time, we have been receiving troubling reports and of torture and other ill-treatment. It is important to ensure that these are well documented, also to allow investigation of and future accountability for such acts. Timely medical examinations are crucial in this regard, alongside the important work of human rights organizations gathering information on these cases.

In my capacity as the UN Resident Coordinator and together with the Senior Human rights advisor in my office, Omer Fisher, we conveyed these messages directly to our national counterparts, first and foremost through the Minister of Foreign Affairs in Belarus and to the Ministry of Interior and other state institutions responding to the crisis.  We have also raised these issues in writing, especially the question of missing persons.  I am encouraged by the fact that the MoI has responded to our letter and that we are gradually receiving more information from the state authorities.

In addition to dialogue with the State, we continue to discuss the current situation with civil society partners.  Both human rights NGOs and the leaders of SDG Partnership Group have expressed concern about the violence of the security forces, the lack of action, and delays in the investigation of alleged violations, including torture and other ill-treatment)..

At the UN, we are also receiving complaints directly from the victims and their lawyers: the majority of them do not feel confident that submitting complaints to the authorities will result in proper investigation.

For several years now, the UN in Belarus has been supporting organizations which offer psychological and legal support to victims of violence.  The demand for this kind of assistance has increased dramatically and we will continue to provide capacity support to the national partners and non-governmental organizations involved in addressing these problems.

Kseniya Golubovich
Protesters detained during demonstrations in Minsk, Belarus, are released from prison.

Like everywhere in Europe, new cases of COVID-19 in Belarus are on the rise.  And of course, mass protests and especially detention of demonstrators in overcrowded institutions without proper physical distancing and other prevention measures can lead to further spread of infection.

In the first half of 2020 we adjusted our priorities and the actual content of our work has changed. All together, we provided some $7.5 million to the national response, including supporting the health system, and addressing the socioeconomic impact, namely, helping SMEs to strengthen their entrepreneurial skills.

The UN never closed offices, although many of our staff have been working from home. While the focus has been and remains on COVID-19 response, we continue working on long-term development issues.  For example, we provided policy advice and concrete suggestions on what should be included in Belarus’ long-term development strategy up until 2035, which is being developed this year.

Kseniya Halubovich
Protesters, young and old, have taken to the streets in Belarus over the disputed presidential election.

‘The only path forward is one of dialogue’

From the UN’s perspective, Belarus should set more ambitious development plans, by prioritizing the needs of young people and the ageing population; strengthening the position of women in the economy; and embracing new technologies and opportunities that will support sustainable economic growth that benefits the poorer and most marginalized segments of the society.  This is the vision of cooperation in the next five years of our presence in Belarus.

Amid COVID-19, climate change and political upheaval, Belarus finds itself in an extremely competitive global and regional environment. The only path forward for the country is one of dialogue, ambitious reform and an innovative development agenda, underpinned by true respect for human rights.

There is no sustainable development without human rights.  The UN in Belarus will continue to work on addressing these needs even though it is a challenging and stressful time, especially for the Belarusian members of our team.
We are often asked “could the UN do more?”. I would say that we are trying to do our utmost in this complex situation for Belarus, with the tools that are at our disposal.  With good will, new energy, a willingness to engage in dialogue, and professional effort on all sides, I am sure Belarus will continue to grow and develop.