It may have dropped from the top of news headlines in recent months, but air pollution remains a lethal danger to many: it precipitates conditions including heart disease, lung disease, lung cancer and strokes, and is estimated to cause one in nine of all premature deaths, around seven million every year.

Air pollution is also harming also harms our natural environment. It decreases the oxygen supply in our oceans, makes it harder for plants to grow, and contributes to climate change.

Yet, despite the damage it causes, there are worrying signs that air pollution is not seen as a priority in many countries: in the first ever assessment of air quality laws, released on 2 September by the UN Environment Programme (UNEP), it was revealed that around 43 per cent of countries lack a legal definition for air pollution, and almost a third of them have yet to adopt legally mandated outdoor air quality standards.

Unsplash/Alexander Popov
Transport is a huge driver of air pollution.

Agricultural processes and livestock produce methane, an extremely powerful greenhouse gas, and a cause of asthma and other respiratory illnesses. Methane is also a by-product of waste burning, which emits other polluting toxins, which end up entering the food chain. Meanwhile industries release large amounts of carbon monoxide, hydrocarbons, particulate matter and chemicals.

Transport continues to be responsible for the premature deaths of hundreds of thousands of people, despite the global phase out of dangerous leaded fuel at the end of August. This milestone was lauded by senior UN officials, including the Secretary-General, who said that it would prevent around one million premature deaths each year. However, vehicles continue to spew fine particulate matter, ozone, black carbon and nitrogen dioxide into the atmosphere; it’s estimated that treating health conditions caused by air pollution costs approximately $1 trillion per year globally.

Whilst it may not come as a great shock to learn that these activities are harmful to health and the environment, some people may be surprised to hear that households are responsible for around 4.3 million deaths each year. This is because many households burn open fires and use inefficient stoves inside homes, belching out toxic particulate matter, carbon monoxide, lead and mercury.

WHO / Andrew Esiebo / Panos Pictures
A 54-year-old Nigerian man with type 2 diabetes had to have his right foot amputated.

3) This is an urgent issue

The reason that the UN is ringing alarm bells about this issue now, is that the evidence of the effects of air pollution on humans is mounting. In recent years exposure to air pollution has been found to contribute to an increased risk of diabetes, dementia, impaired cognitive development and lower intelligence levels.

On top of this, we have known for years that it is linked to cardiovascular and respiratory disease.

Concern about this type of pollution dovetails with increased global action to tackle the climate crisis: this is an environmental issue as well as a health issue, and actions to clean up the skies would go a long way to reducing global warming. Other harmful environmental effects include depleted soil and waterways, endangered freshwater sources and lower crop yields.

On International Day of Clean Air for blue skies, the UN is calling on governments to do more to cut air pollution and improve air quality.

Specific actions they could take include implementing integrated air quality and climate change policies; phasing out petrol and diesel cars; and committing to reduce emissions from the waste sector.

Businesses can also make a difference, by pledging to reduce and eventually eliminate waste; switching to low-emission or electric vehicles for their transport fleets; and find ways to cut emissions of air pollutants from their facilities and supply chains. 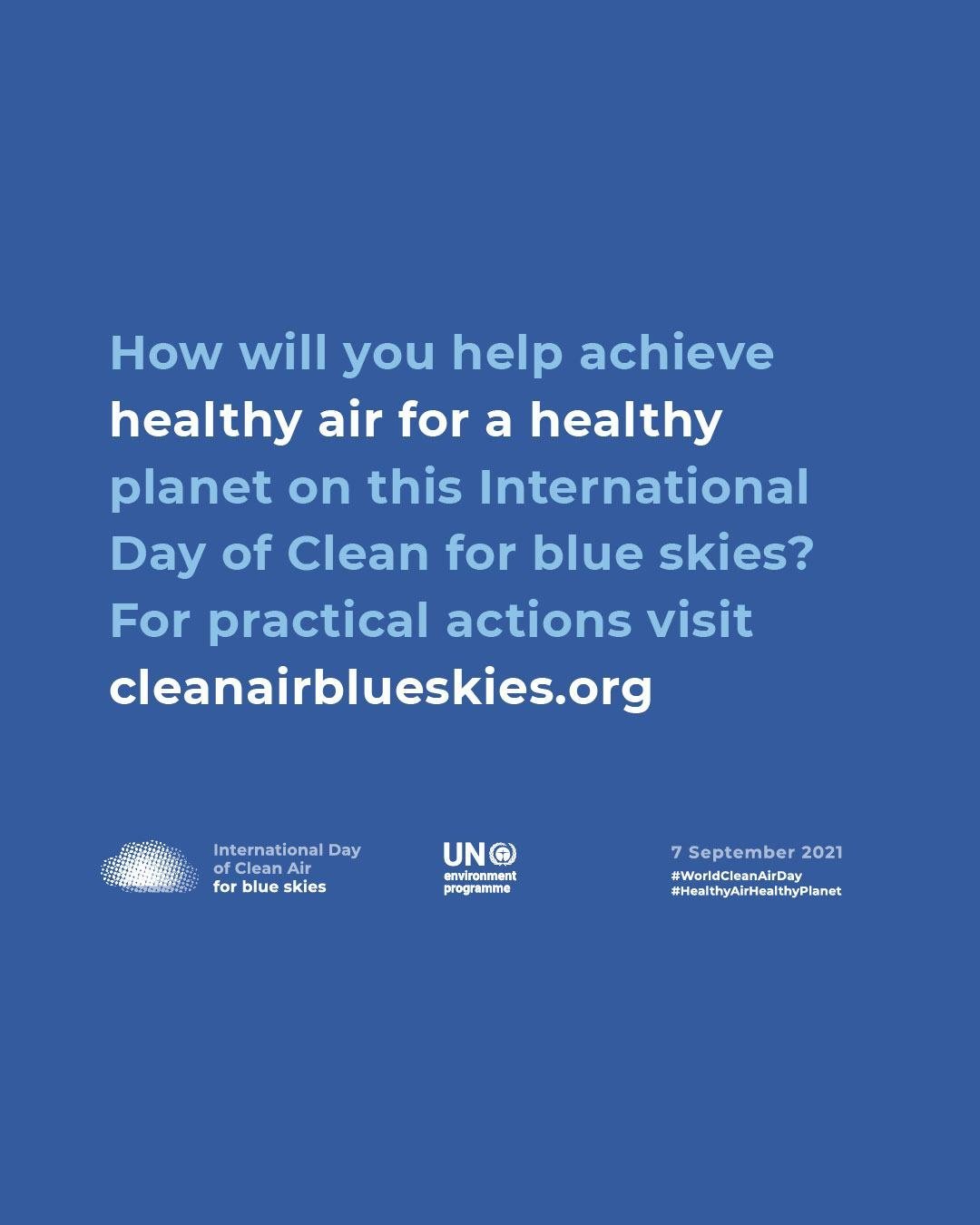 5)…and it is our responsibility, as well

At an individual level, as the harmful cost of household activities shows, a lot can be achieved if we change our behaviour.

The Website for the International Day contains more ideas of actions that we can take, and how we can encourage our communities and cities to make changes that would contribute to cleaner skies: these include organizing tree-planting activities, raising awareness with events and exhibitions, and committing to expanding green open spaces.

How clean is your air?

You may well be wondering exactly how clean or dirty the air around you is right now. If so, take a look at a UNEP website which shows how exposed we are to air pollution, wherever we live.

The site indicates that more than five billion people, or around 70 per cent of the global population, are breathing air that is above the pollution limits recommended by the World Health Organization (WHO).