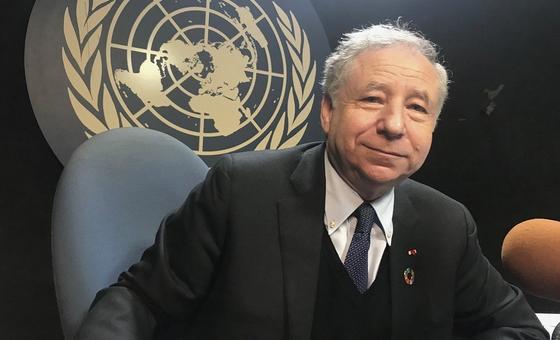 Although he was known as “Mr Speed” during his career as a highly successful rally co-driver in the 1960s and 1970s, Jean Todt has turned his focus to reducing the huge annual death toll from road accidents, in his capacity as UN Special Envoy for Road Safety.

Mr. Todt is well placed to comment on the coming transition to electric vehicles: as president of the Fédération Internationale de l’Automobile, (FIA, the motorsports governing body), he was instrumental in setting up Formula E, a fully electric racing championship. Whilst he is a strong proponent of electric vehicles, Mr. Todt frequently advocates for the developing world, where any kind of car, whether electric or fossil-fuel powered, is out of the reach of many citizens, and where the vast majority of fatal road accidents occur.

UN News spoke to Mr. Todt ahead of the United Nations Sustainable Transport Conference, which is taking place in Beijing, and online, between 14 to 16 October.

The Road Safety Envoy will be one of the speakers at the event, which will focus on ways to reduce the negative environmental, social and health impacts of transport, and improving access to safe and reliable mobility, especially for vulnerable groups.

Transport demand is expected to triple within the next 35 years: is a sustainable transport future really possible?

One of the aims of Sustainable Development Goal 11 is to provide all citizens with access to public transport systems by 2030, and we are far behind that target.

If we look at road safety, 1.3 million people die in road accidents every year, and 92 per cent of them are in the developing world.

So how can this be addressed, and how can we create a safer, more sustainable transport future created? I would say that, whilst it is a concern for everybody, the problem must ultimately be addressed by governments.

They need to make transport a priority. I’m French and in 1973, some 18,000 people were killed on the roads. Today, with three times as many vehicles, 3,000 died. I feel that, on the roads, the developing world is half a century behind the developed world.

Unsplash/Yoel J Gonzalez
People wait for a light change at a pedestrian crossing in San Francisco, in the United States.

If richer countries transition to electric vehicles, is there are a risk that developing countries will be flooded with combustion engine cares? what do you think that would mean for road safety and for climate change?

We must work with governments, car makers, motorbike companies, to make sure that these countries have access to vehicles with minimum standards.

And we know how to do this: it involves education, law enforcement, good quality infrastructure, and good post-crash care.

With regards to climate change, “green fuel” will be a game-changer. We don’t have to wait for electric cars to be introduced all over the planet, we can very quickly have access to green fuel, and this is urgent.

You mentioned the UN goal of access to public transport for all by 2030. How can we achieve this?

It is not an easy question. This was an important goal, but the question is how we get there, and it is difficult to see a clear roadmap to achieve that result. But the important thing is to address the situation, and it is essential to have the ambition.

We also need to monitor the evolution of these goals, which is why I’m very keen to see what happens at the UN Sustainable Transport Conference in China.

(This interview has been edited for clarity and length)