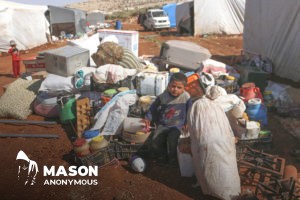 “People around the world have watched in horror as war planes and artillery shelling kill and injure civilians and destroy civilian infrastructure. In the last 80 days we have seen more than 350 civilians killed, many more injured, and 330,000 people displaced”, said Mark Lowcock, the UN Emergency Relief Coordinator and head of OCHA.

For 80 days people around the 🌎 have watched in horror as war planes & artillery shelling kill and injure civilians & destroy civilian infrastructure.

This carnage must stop. It must.https://t.co/ny8DN07mu1

Last September, in an effort to stave off a humanitarian disaster in and around Idlib, a deconfliction zone was established through a Memorandum of Understanding between Russia and Turkey, which separated pro-Government forces and militant opposition fighters.

But in the last three months, fighting has intensified again as extremists have become the dominant force within the rebel coalition, and the Government appears determined to recapture all territory lost during more than eight years of brutal conflict.

Since 1 July, at least six health facilities, five schools, three water stations, two bakeries, and one ambulance have been damaged or destroyed”, said Mr. Lowcock in a statement, after briefing the Security Council behind closed doors.

Entire villages have been destroyed and emptied. On 16 July we received reports of an attack on the main market street of Ma’ar Shureen village leaving 12 people dead, including a child, and 20 more injured. The carnage must stop”, he said.

He noted with particular concern, an attack on 10 July on Ma’arat National Hospital, which was carried out despite its coordinates and location being well known.

“Referrals from throughout the region stream into the hospital, and it manages as many as 20,000 cases a month. There were reportedly 250 people in the hospital when the attack took place, including many requiring emergency care. The hospital has now resumed functioning. I call again for it to be protected”, he said.

The relief chief condemned “the unjustified and unwarranted brutality that civilians are being forced to endure in Idleb”, noting that OCHA had significantly scaled up humanitarian cross-border operations “to ease the suffering and meet the needs of the population, particularly for the over 330,000 people who have fled to the northern part of Idleb during the current fighting.”

However, he warned that delivering humanitarian assistance in areas where military operations were ongoing “is difficult, and sometimes impossible”.

Mr. Lowcock called on all involved in the fighting to:

* End the killing of civilians and destruction of civilian infrastructure.