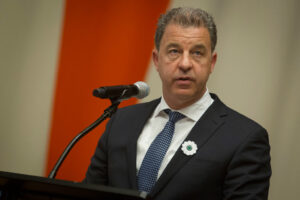 In the Félicien Kabuga case, Prosecutor Brammertz reported that the trial team filed its pre-trial brief and responded to significant additional litigation initiated by Mr. Kabuga’s family members and associated third parties concerning sized assets.  “My Office is ready for and looks forward to the commencement of this trail at the Arusha Branch when ordered by the Trial Chamber,” he asserted.

His Office also completed two more trials during the reporting period, he continued:  At The Hague Branch, Jovica Stanišić and Franko Simatović were convicted at trial for aiding and abetting the crimes of murder, deportation, forcible transfer and persecution as crimes against humanity, and murder as a war crime.

At the Arusha Branch, in the Nzabonimpa et al. case, four accused were convicted at trial for contempt of court, with the Office proving that they engaged in a “brazen effort” to interfere with the administration of justice by improperly influencing witnesses to recant in a failed effort to overturn Augustin Ngirabatware’s genocide conviction.

With the start of the Kabuga trial approaching, “we look forward to this opportunity to achieve more justice in the courtroom for the victims of the 1994 Genocide against the Tutsi in Rwanda.”

Search for fugitives at ‘decisive’ stage

Turning to the search for remaining fugitives indicted by the International Criminal Tribunal for Rwanda, Prosecutor Brammertz said the most wanted fugitive is Rotais Mpiranya, the former commander of the Presidential Guard.

His Office is also working to locate and account for five other fugitives indicted for genocide, including Fulgence Kayishema, who was previously located in South Africa.

“The coming period will be of decisive importance,” he said. “We expect further significant advancements in our work”.  The success of these efforts depends on the full and effective cooperation of Member States, including Zimbabwe and South Africa.

Regarding Zimbabwe, Prosecutor Brammertz said he had undertaken a mission in November to Harare, where he met with Vice President Constantino Chiwenga and other senior officials, who reaffirmed Zimbabwe’s unreserved commitment to assist his Office.

He said that while he had not yet received a response to recommendations for improving cooperation, “I trust that in the coming period, I will be able to report that Zimbabwe is providing full and effective cooperation.”

In South Africa, a failure to cooperate

Turning to South Africa, where his Office has faced “immense” challenges over three years in obtaining cooperation, he reported that the Government failed to arrest Mr. Kayishema and to provide critical information.

“The situation with South Africa is among the most severe instances of non-cooperation my Office has faced since the Mechanism’s establishment,” he stressed.

Nonetheless, he said his Office submitted an urgent request three months ago to establish a joint investigation team and he visited Pretoria in November to discuss the matter.  “Unfortunately, I am unable to provide a more positive update today,” he said.  “South Africa is still failing to adhere to its international obligations.”

In terms of assisting national jurisdictions prosecuting international crimes committed in the former Yugoslavia and Rwanda – he said the workload associated with this residual function is much greater than anticipated.

Finally, Mr. Brammertz reported on the continued denial of crimes and glorification of génocidaires and war criminals, stressing that murals of Ratko Mladić in Belgrade and the publications of extremist Rwandan diaspora groups have “one sad thing” in common:

“More than 25 years later, there are still those who deny, relativize and minimize the judicially established facts of genocide, crimes against humanity and war crimes.”

While some may say that truth and justice are the source of social conflict, Mr. Brammertz explained, “the reality is that genocide denial and glorification of war criminals provoke hatred,” condemning present and future generations to bear the burdens of the past.

Judge Carmel Agius, President of the International Residual Mechanism, presented the legal body’s report to the Security Council (document A/76/248-S/2021/694), highlighting the “strong progress” made during the reporting period.

He described the Mechanism’s on-time delivery of all three judgements projected for June 2021 – the appeal judgement in the Mladić case, as well as trial judgements in the Stanšić and Simatović case and the Nzabonimpa et al. case – as “striking”.

He credited the “remarkable” efforts by the Mechanism’s judges, staff and defence teams to overcome obstacles that could have derailed the cases.

As a result of its favourable performance, the Mechanism has entered a new chapter in its operations, he said.  The core driver of its activities – its pending judicial caseload – is now limited to appeal proceedings in its cases and the trial in the case against Félicien Kabuga.