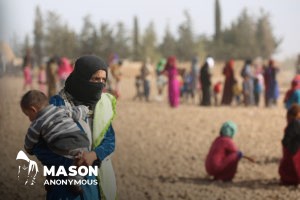 The UN office cited information suggesting that Kurdish authorities are responsible for holding youngsters over 12 years old in al-Hassakeh governorate, in the far north-east of the country.

“Reportedly, they are neither allowed to communicate with their families nor have the families been informed about their whereabouts or status”, OHCHR Spokesperson Marta Hurtado said.

Children must be treated primarily as victims, not perpetrators – UNICEF

In Syria alone – highlighting families of extremists who came to be part of the now militarily defeated so-called Caliphate – the UN Children’s Fund (UNICEF) estimates that there are close to 29,000 foreign children, most of them under the age of 12. Some 20,000 children are from Iraq, while more than 9,000 are from around 60 other countries.

Addressing the fate of thousands of vulnerable children of foreign fighters who are living in camps, detention centers and orphanages in Syria, Iraq and other places in the world, UNICEF’s Executive Director, Henrietta Fore said on Tuesday they were being forced to live in generally “appalling conditions”.

Underlining the “constant threats to their health, safety and well-being”, she said they were being “doubly rejected – stigmatized by their communities and shunned by their governments”.

In the statement, Ms. Fore also said the children faced “massive legal, logistical and political challenges in accessing basic services or returning to their countries of origin”.

With an additional 1,000 children of foreign fighters believed to be in Iraq, Ms. Fore said that “all of them are victims of deeply tragic circumstances and egregious violations of their rights” and reiterated the importance of “treating and caring for them as children.”

In a related development, OHCHR also expressed concern about the fate of people in Syria’s al-Hol camp – also in al-Hassakeh Governorate – who fled the last ISIL-held areas in the country as they were being reclaimed by Kurdish-led forces. Today, the camp hosts more than 70,000 people who face dire living conditions.

This includes some 2,500 children under 12 years old who were born to ISIL-affiliated fathers and have been allowed to stay with their mothers.

While the temporary restrictions of movement imposed on civilians at al-Hol and in other camps for internally-displaced people (IDPs) run by the Kurdish authorities may be part of a screening and vetting process, Ms. Hurtado said that OHCHR was concerned about the “lack of clarity regarding how long these restrictions will last”.

In north-west Syria, meanwhile, the UN official said that airstrikes and ground-based attacks continue to pound Idlib and Hama governorates, despite the announcement of a 72-hour ceasefire.

Since this latest military escalation started at the end of April, at least 105 civilians have been killed, and at least 200,000 people have fled the hostilities in southern Idlib and northern Hama, according to the UN office.

From 8 to 16 May, “multiple attacks” by pro-Government forces claimed the lives of at least 56 civilians – including many women and children.

The assaults also caused severe damage to five schools and one hospital, according to OHCHR, while in the same period, attacks by non-State armed groups were reported, causing at least 17 civilian deaths, mainly women and children.

“Military objects have been placed in close proximity to civilians and civilian objects, resulting in civilian deaths and injuries, and causing significant damage to civilian infrastructure, such as hospitals, mosques, schools and markets,” the UN human rights office said in a statement.

Non-State armed groups have launched ground-based attacks on areas under the control of Government forces, hitting residential neighbourhoods and refugee settlements in Hama governorate and Aleppo city, it said.

The development comes 10 months after so-called “reconciliation agreements” in Dar’a Governorate between the Government of Syria and some armed non-State groups. Under the deal, the Government re-established its civilian authority across the whole province, but some of the armed groups continued to retain effective military control in some areas.

“We have received reports that between 26 July 2018 and 31 March 2019, a number of former members of the armed groups and civilians who took up positions in Government entities including in civilian local councils or military or security forces have been killed in what appears to have been targeted killings,” Ms. Hurtado said. “We have been able to document 11 such incidents.

During the same period, OHCHR also received reports that at least 380 people were arrested or detained. “In many cases, the reasons for such arrests remain unclear, and little or no information is given to the families of the detainees about their whereabouts and status,” Ms. Hurtado said.

While 150 detainees were released after a few days at least 230 “have been subjected to enforced disappearances,” she noted, adding that in March this year, two detainees died in Government custody, only days after being arrested.