The two tropical cyclones came quick on the heels of Hurricane Fiona, which caused deadly flooding in the Caribbean and was the strongest storm on record to hit Canada. Typhoon Nanmadol, prompted the evacuation of nine million people in Japan.

The World Meteorological Organization has reminded that climate change is expected to increase the proportion of major tropical cyclones worldwide, and to increase the heavy rainfall associated with these events.

“The human and socio-economic impacts of these cyclones will be felt for years,” warned Cyrille Honoré, WMO Director of Disaster Risk Reduction and Public Services branch. 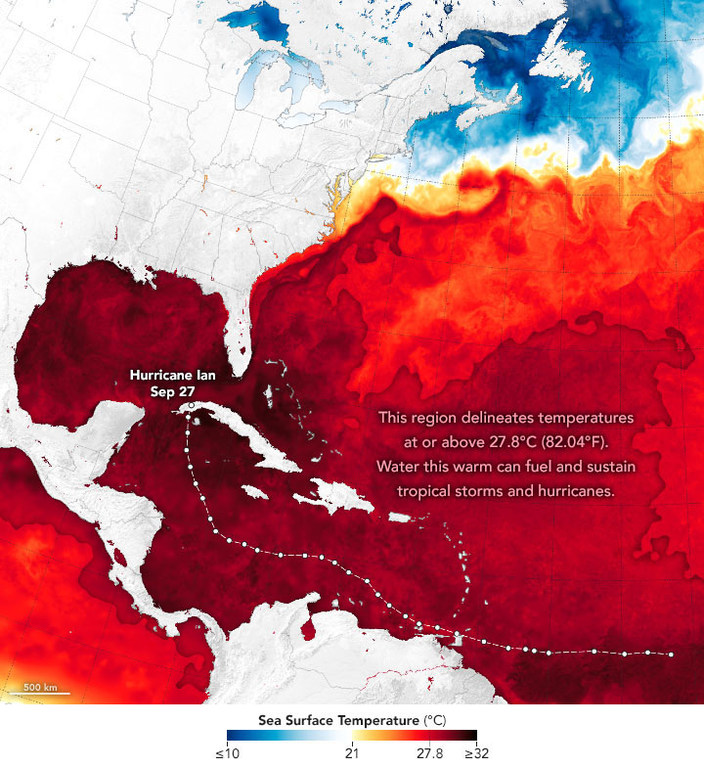 NASA
Map showing sea surface temperatures (SSTs) as measured on September 26 by a combination of satellite and ocean instruments and processed by NASA scientists.

Hurricane Ian slammed into Cuba on 27 September as a Category 3 storm, with sustained winds of 205km/h and even stronger gusts leading to flash flooding and mudslides.

It is estimated that more than three million people have been affected, the UN Resident Coordinator’s Office informed.

According to WMO, Cuban President Miguel Díaz Canel said that the damage caused by Ian will likely be significant, though only preliminary assessments have been carried out.

There were no immediate reports of casualties. But there was severe damage to infrastructure, housing, agriculture, and telecommunications, with power reportedly lost to the entire country. Pinar del Río, the hardest hit province, is home to 75 per cent of the country’s tobacco production – a key export for Cuba – and about 40 per cent of the nation’s bean production.

Ian is intensifying rapidly and is now a very strong category 4 hurricane (maximum sustained winds near 155 mph (250 km/h) with higher gusts). It is expected to maintain this intensity.

Ian is the first hurricane to make landfall in mainland United States this season.

Typhoon #Noru has made landfall in #VietNam as strong Cat. 2 equivalent hurricane. High winds and devastating rainfall.
We hope that #EarlyWarningEarlyAction in VietNam has limited casualties from this powerful typhoon.
Himawari 8 satellite image 27.09.2022, 1800 UTC pic.twitter.com/UHawgwnr8i

The US national weather service warned of catastrophic wind damage near the core of Ian when it moves onshore and of life-threatening storm surge and catastrophic flooding.

The combination of storm surge and the tide will cause normally dry areas near the coast to be flooded by rising waters moving inland from the shoreline, according to expert forecasts. The water could reach up to 12 to 16 feet (3.5 to 4.8 meters) in the worst affected areas.

Heavy rainfall will spread across central and northern Florida through Thursday as it is forecasted to slow its forward motion. Ian is forecast to reach portions of the US Southeast later this week and this weekend (1-2 October).

“Ian poses an exceptional threat because of its size, its strength and its landfall in a heavily populated, low-lying area”, WMO has warned.

More than two million people live in the worst affected areas, according to a disaster analysis, and nearly 430,000 people were directly impacted. Despite the relatively short space of time for mobilization, thousands of people were successfully evacuated, limiting loss of life.

From 26-27 September, typhoon Noru made its way towards Viet Nam, and intensified once again.

The importance of early warnings

“It is more important than ever that we scale up action on early warning systems to build resilience to current and future climate risks in vulnerable communities,” said WMO Secretary-General Prof. Petteri Taalas.