In a statement issued on Thursday, Secretary-General António Guterres underlined that in the midst of the COVID-19 pandemic, corruption was proving to be even more damaging in its impact on the most vulnerable.

Corruption is criminal, immoral & the ultimate betrayal of public trust.

It is even more damaging in times of crisis – like the world is seeing right now amid #COVID19.

We must create more robust systems for accountability & transparency without delay. https://t.co/JT2rgzWwJ9 pic.twitter.com/hgLVFa7bSO

“The response to the virus is creating new opportunities to exploit weak oversight and inadequate transparency, diverting funds away from people in their hour of greatest need,” the Secretary-General said.

Corruption during the pandemic can seriously undermine good governance globally, and send the world even further off-track in in its efforts to achieve the Sustainable Development Goals (SDGs), he added.

There are also very direct risks to health: “Unscrupulous merchants peddle faulty products such as – defective ventilators, poorly manufactured tests or counterfeit medicines”, said Mr. Guterres, noting that collusion among those who control supply chains has led to outrageous price hikes, skewing the market and denying many people life-saving treatment.

The UN will continue to prioritize transparency and accountability, in and beyond the COVID-19 response, the UN chief pledged.

The Secretary-General called on Governments to be careful and not act in haste, making sure to vet suppliers, and ensure fair pricing of essential goods as supply chains continue to be under strain.

He also urged everyone to join hands against corrupt and exploitative acts.

“We must work together to stop such thievery and exploitation by clamping down on illicit financial flows and tax havens; tackling the vested interests that benefit from secrecy and corruption; and exercising utmost vigilance over how resources are spent nationally”, urged Mr. Guterres.

We must create more robust systems for accountability, transparency and integrity without delay, he added.

Everyone has a part to play

Mr. Guterres also called for governments and leaders to be transparent and accountable, and for businesses to act responsibly, highlighting the importance of a vibrant civic space and open access to information. 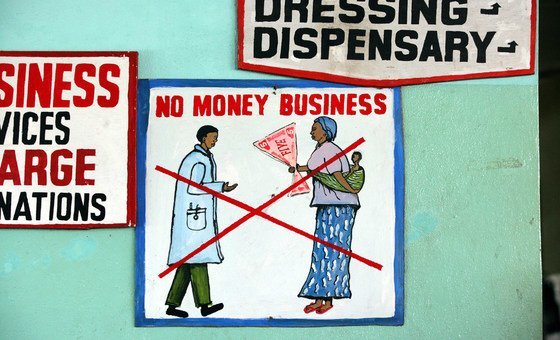 A sign outside a hospital in the Liberian capital, Monrovia, urges patients not to bribe doctors or other staff for any services. The UNICEF-supported hospital offers its services for free., by UNICEF/Pirozzi

Whistle-blowers who expose wrongdoing, must get the legal protection they deserve, in calling out corruption.

“Technological advances can help increase transparency and better monitor procurement of medical supplies,” explained the Secretary-General, adding that anti-corruption bodies should be supported and empowered.

The Secretary-General also urged nations to use a vital tool, provided by the UN: adopted by the General Assembly in 2003, the United Nations Convention against Corruption, entered into force in December 2005. It currently has 187 States Parties.

It is the only legally binding universal anti-corruption instrument, and its far-reaching approach and the mandatory character of many of its provisions make it a unique tool for developing a comprehensive response to corruption.

Through five key areas – preventive measures; criminalization and law enforcement; international cooperation; asset recovery; and technical assistance and information exchange – the Convention covers many different forms of corruption, such as bribery, trading in influence, abuse of functions, and various acts of corruption in the private sector.