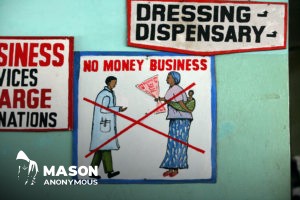 In an interview with UN News on Tuesday, the senior United Nations official pointed out that tackling corruption plays an important role in the 2030 Agenda for Sustainable Development, the Organization’s blueprint for a sustainable future that leaves no one behind.

“The fight against corruption is deeply rooted in Sustainable Development Goal 16, which aims to provide access to justice for all, and build effective, accountable and inclusive institutions at all levels,” she explained.

“One of the targets within this Goal, Target 6.15, is to ‘substantially reduce corruption and bribery in all its forms’, and the UN Office on Drugs and Crime is the guardian of the only legally binding universal anti-corruption instrument: the UN Convention Against Corruption (UNCAC). The vast majority of UN Member States are parties to the Convention”.

Success in achieving this target is measured by the reduction, on an annual basis, in the proportion of businesses, and people, who paid, or were asked to pay, a bribe to a public official.

“The Convention’s far-reaching approach makes it a unique tool for developing a comprehensive response to the global problem of corruption”, said Ms, Dummar-Frahi. “The countries that are party to it have made great progress, and have improved their anti-corruption regulations and legislation”.

This process has brought the fight against corruption to a higher level, she explained, helping to harmonize legislation and international cooperation, and a peer-review process, adopted in 2009, has created momentum, advancing and evaluating the implementation of the Convention into domestic law.

Since 2011, teams from UNODC have been training civil society organizations to work with national authorities, and helping them to take part in anti-corruption events, outreach and other activities.

Civil society, individuals and the private sector need to be encouraged to actively participate in preventing corruption, and raising awareness of its existence, as well as the causes and gravity of the threat it poses, urged Ms. Dummar-Frahi.

“There are three main areas where civil society and other non-State partners can work towards ending corruption: advocacy, monitoring and building expertise,” she said.

“In the course of conducting advocacy, civil society organizations can gain insights and gather information for further monitoring initiatives, which can ensure that standards or obligations have been fulfilled. They can identify gaps, and provide evidence for advocacy at the local, national and international levels”.

“The more expertise they gain, the better assistance they can give to governments in effective implementation of the Convention Against Corruption and other anti-corruption legislation”.