With support from WHO & partners, more than 2⃣ million doses of #COVID19 vaccine are set to arrive in 7 countries in the Americas 🌎 through #COVAX.

The number of deaths from the virus also increased – now for the sixth consecutive week – with more than 87,000 confirmed victims.

All parts of the world reported falling numbers of infections, apart from Southeast Asia and Western Pacific regions.

And although Southeast Asia reported the highest increases in infections and deaths for the third week in a row, it was India that accounted for the vast majority of cases, with 2.17 million new cases – a 52 per cent increase.

On the three known coronavirus variants of concern, WHO said that the so-called UK strain has been detected and verified in three more countries since last week, bringing the total to 139; that’s effectively most of the world, except Greenland and several central and southern African nations.

The South African origin variant is in 87 countries and the mutations first found in Brazil and Japan, has been reported in 54.

Monitoring is ongoing into seven other so-called “variants of interest”, the UN health agency said.

Globally, there have been more than 148 million confirmed cases of COVID-19, including 3.1 million deaths, according to WHO. 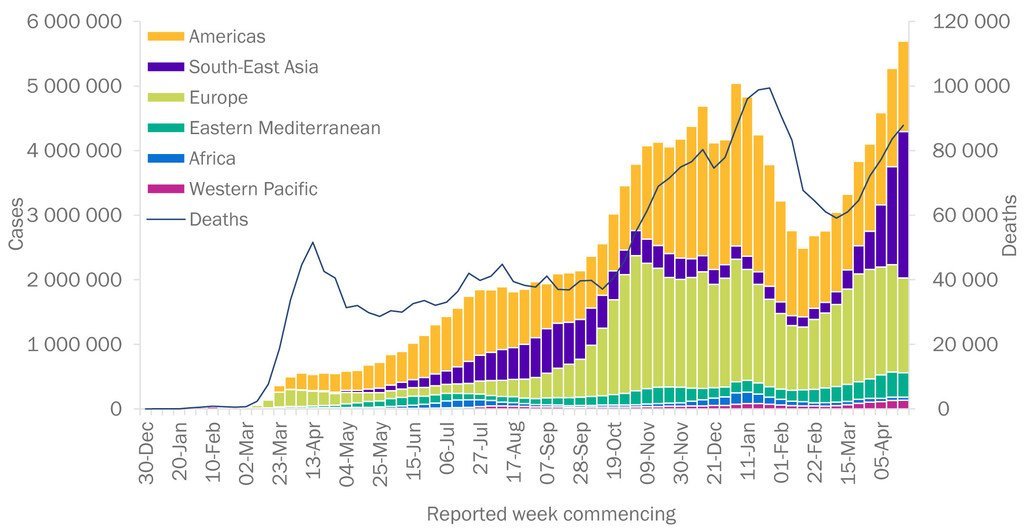 WHO
COVID-19 cases and global deaths.