It’s a warm tropical February afternoon at the National Tropical Botanical Garden on the island of Kauai, in the Hawaiian archipelago, and two researchers are busying themselves in a grove of breadfruit trees.

The generous rainfall on this Pacific island and the long sunny days create a verdant environment in which fruits and vegetables grow rapidly and plentifully.

The starch-rich breadfruit tastes similar to potato and is seldom eaten raw, but, like the potato, it can be roasted, baked, boiled, fried, or dried and ground into flour. It grows to the size of a small soccer ball on a medium-sized bushy tree, which begins to bear fruit within three to five years, and which remains productive for many decades. These trees require little attention or care, producing an abundance of food with a minimal amount of labour or materials, and they thrive under a wide range of ecological conditions.

Return of the ‘canoe plants’

Noel Dickinson is a research technician and farmer who has been cultivating the fruit at the Breadfruit Institute which is part of the garden. “Breadfruit was one of about 27 so-called ‘canoe plants’, that were brought by voyaging Polynesian people when they settled these islands centuries ago,” she told UN News, as she cradled an almost ripe fruit in her hand. “These 27 plants were very important to the voyagers because they could be used in many different ways including as food, building material and medicine; and they were also extremely resilient.”

ILO Photo/John Isaac
The starch-rich breadfruit was one of around 27 canoe plants that were brought to Hawaii by early Polynesian settlers.

In recent times, the breadfruit, of which there are 150 varieties, has fallen out of culinary favour as a staple dish despite the ease with which it can be grown, and its highly nutritious and versatile nature.

But now the Breadfruit Institute is trying to change that, recognizing that cultivating the tree, especially in less developed tropical countries, can not only provide a significant source of food to hungry people, to help solve what the Institute calls “critical global food security issues,” but can also bring important environmental benefits.

“Breadfruit trees help to diversify agriculture and agroforestry and improve soil conditions and watersheds,” said Noel Dickinson, adding that “they also help to reduce carbon dioxide in the atmosphere, so have a role to play in fighting climate change.”

As Noel Dickinson continues to tend the breadfruit trees and promote the importance of biological diversity, on the other side of the botanical garden, important work is underway in the shade house to save indigenous plants and support the conservation of the Hawaiian Islands’ mountain ecosystems.

Of the nearly 1,300 endemic species that have been identified on the islands, more than 100 are considered to be extinct and a further 273 classified as threatened and endangered. 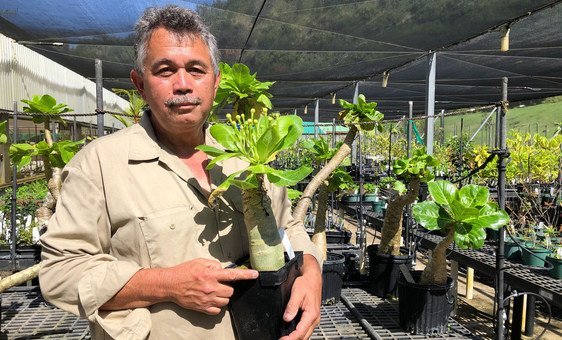 Mike Demotta is the National Tropical Botanical Garden’s Curator of Living Collections and is passionate about saving these indigenous plants.

“I really feel responsible for doing whatever I can to conserve and perpetuate native plants because they are an important part of the ecosystem,” he said. “Without these plants, we would probably not be able to live here for very long. If there are too many invasive species, and if our forest systems collapse entirely, the islands could not hold any rainwater: our water supplies would literally evaporate and these islands would become uninhabitable.”

Protecting Hawaii’s biodiversity is a key element of Sustainable Hawaii, an initiative launched in 2016 by the State Governor David Ige, which supports the UN’s Sustainable Development Goals or SDGs. The initiative includes managing and protecting watersheds, protecting native species by reducing the impact of alien species and, crucially, doubling by the end of 2020 local food production, including promoting traditional crops like breadfruit. 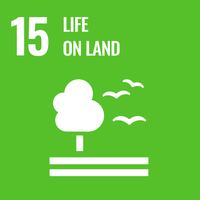 “Hawaii, like many other island communities, has had to import food,” Governor Ige told UN News. “More than 90 per cent of the food consumed here is imported from somewhere else, and we recognize that if we can invest in our communities, we would be able to grow more of our food. Our commitment to the Sustainable Development Goals is really a commitment to sustainable communities, to investing in ourselves.”

Investing in people makes sense not just in developed communities like Hawaii, but also in developing world countries, especially small island states according to Kevin Cassidy, the Director of the ILO Office for the United States. “If developing countries invest in basic education and skills training for workers in their agro-food value chains they will experience exponential productivity growth, better environmental stewardship and an increase in entrepreneurship for resilient livelihoods, particularly in rural areas.”

Back in the breadfruit grove at the National Tropical Botanical Garden, varieties of breadfruit that no longer exist on their native islands are being preserved. And, crucially, the team is now working on how best to mass-produce plants, so that thousands of trees can ultimately be distributed to tropical countries around the world, where hunger is a critical issue.