“The fears legitimately nurtured by the civilian populations who are still suffering the harmful effects of persistent ceasefire violations […] continue to be reported,” said Valentine Rugwabiza, the Secretary-General’s Special Representative for the Central African Republic and Head of the UN’s peacekeeping mission in the country, known by its French acronym, MINUSCA.

Noting that the mission maintains a frank and constructive dialogue with the CAR Government on human rights, she said it is working with authorities on the ground to adopt preventive measures, combat impunity and rehabilitate victims. 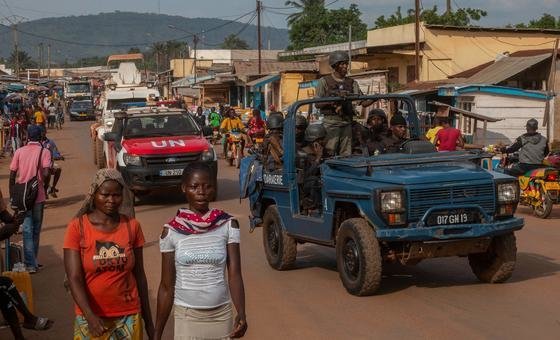 While CAR had been registering positive steps towards restoring peace and stability, following the adoption of its Joint Road Map for Peace in October 2021, many report that progress is now languishing.

The Road Map was itself an attempt to more fully implement a 2019 peace agreement, known as the Khartoum Accord, which was signed between the Government and 14 non-State armed groups.

CAR has been grappling with conflict since 2012, as fighting between the mostly Christian anti-Balaka militia and the mainly Muslim Séléka rebel coalition killed thousands and left two out of three civilians dependent on humanitarian aid.

Despite the holding of a “republican dialogue” involving several constituent groups in March, recent weeks have seen fresh attacks against civilians by non-State groups, as well as militias affiliated with the Government.

Targeted attacks against humanitarian workers and certain ethnic groups, including the Fulani and the Gbaya, have also been reported.

Briefing the Council on UN efforts to address those violations and accelerate the CAR’s political process, the Special Representative said MINUSCA is working to strengthen trust with authorities and re-engage partners.

On 4 June, a Strategic Review Meeting was held with the participation of key partners Angola and Rwanda — as well as the Economic Community of Central African States and others — in an effort to remobilize both the wider region and the global community against violence.

The meeting also resulted in the sovereign decision by the CAR authorities to establish a permanent platform for the strategic review of the political process, Ms. Rugwabiza said.

UN Photo/Eskinder Debebe
Peacekeepers serving with MINUSCA, the UN mission in the Central African Republic, patrol in the capital Bangui.

Staying ‘as long as it takes’

Requesting the 15-member Council’s unanimous support, she urged the Government to expedite the implementation of recommendations stemming from the recent republican dialogue.

The cessation of hostilities throughout CAR remains both an immediate objective and a gauge of the Joint Roadmap’s credibility, she added, underlining the need for “consensual dissuasive measures” against those parties who do not uphold their commitments.

Meanwhile, she pledged MINUSCA’s support to the CAR Government “for as long as it takes” to rebuild the capacities needed for more professional defence and security forces.