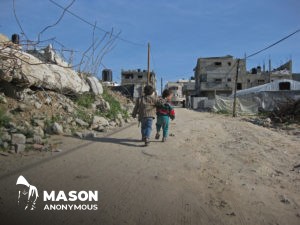 Michael Lynk made the call in his latest report on the situation of human rights in the occupied Palestinian Territory: the West Bank, including East Jerusalem, and the Gaza Strip.

“The status quo of Israel’s ‘occu-annexation’ is endlessly sustainable without decisive international intervention because of the grossly asymmetrical balance of power on the ground,” said Mr. Lynk, a Special Rapporteur who advises the UN Human Rights Council on the issue.

The international community has a responsibility and a legal obligation to compel #Israel to completely end its illegal occupation and remove its barriers to the fulfilment of Palestinian self-determination – UN expert says at #UNGA 👉 https://t.co/xB3nwylJyO pic.twitter.com/qMnlFnaARn

“Accountability is the key to opening the titanium cage that is the permanent occupation. The international community has issued countless resolutions and declarations critical of the never-ending Israeli occupation. The time has long past to match these criticisms with effective consequences.”

To remedy this, Mr. Lynk recommended that the international community should devise a list of effective countermeasures which would be “appropriate and proportional” to the circumstances.

His report outlines some modern examples of applying pressure, such as diplomatic public statements, trade sanctions, flight bans, travel restrictions and reduction or suspension of aid.

“Should Israel remain unmoved, (the international community) should apply and escalate the range of its targeted countermeasures until compliance had been achieved,” he said.

Mr. Lynk said the occupation is the longest in the modern world. It has been characterized by what he described as “a strong sense of impunity” by Israel.

“This occupation will not die of old age,” he stated.

“Palestinians, along with Israelis of conscience, have been asking repeatedly for the international community to act decisively in support of international law to compel Israel to end the occupation and enable Palestinian self-determination. We can’t afford to ignore their call.”

The Special Rapporteurs are part of what is known as the Special Procedures of the Human Rights Council. They work on a voluntary basis; they are not UN staff and do not receive a salary for their work. They are independent from any government or organization and serve in their individual capacity.