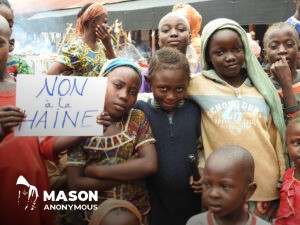 Mr. Guterres noted that the pandemic has been accompanied by “a surge in stigma and racist discourse vilifying communities, spreading vile stereotypes and assigning blame.”

The UN Chief listed some of the disturbing examples of discrimination against religious minorities, such as attacks on people and religious sites, and hate crimes and atrocity crimes targeting populations because of their religion or belief.

In order to counter this discrimination, Mr. Guterres called for more action to address the root causes of intolerance and discrimination by promoting inclusion and respect for diversity, as well as for the perpetrators of crimes of this nature to be held accountable.

UN Photo/Mahmoud Abd ELLatiff
Secretary-General António Guterres speaks at the al-Azhar Mosque in Cairo, expressing his solidarity and underscoring the need to fight the scourge of Islamophobia, as well as all forms of hatred and bigotry. 2 April, 2019.

Freedom of religion is a human right

“The right to freedom of religion or belief is firmly entrenched in international human rights law”, said the Secretary-General, “and is a cornerstone for inclusive, prosperous and peaceful societies.”

States, he added, have the primary responsibility to protect the right to freedom of religion and belief. Initiatives set up by Mr. Guterres to support them include his Call to Action for Human Rights, a Strategy on Hate Speech and a Plan of Action to Safeguard Religious Sites.

The International Day was created by a UN Resolution adopted in May 2019, in response to a rise of intolerance and violence based on religion or belief against individuals, which are often of a criminal nature. Launching his Strategy on Hate Speech in June 2019, Mr. Guterres said that “a groundswell of xenophobia, racism and intolerance, violent misogyny, anti-Semitism and anti-Muslim hatred” are being seen around the world, and noted that, in some places, Christian communities were also being systematically attacked.

The Strategy aims to enable the UN to respond to “the impact of hate speech on societies”, Mr. Guterres explained, by bringing individuals and groups together who have opposing views; working with traditional and social media platforms; and developing communications guidance.