“Science is unequivocal on the urgency to act, both at global and national levels”, he told the conference to address the climate crisis – officially known as the 25th Conference of the Parties to the UN Framework Convention on Climate Change (UNFCCC). 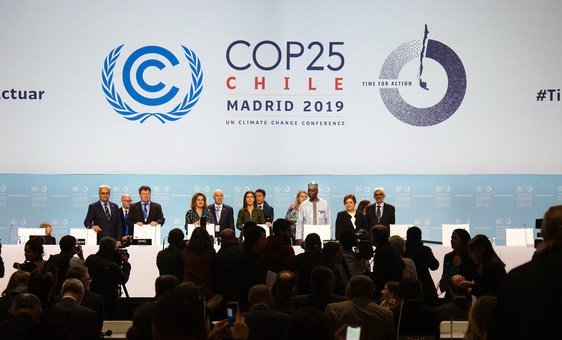 The official opening ceremony of the high-level segment of the 25th Conference of the Parties to the UN Framework Convention on Climate Change, known as COP 25. (10 December 2019), by UN Climate Change/James Dowson

Mr. Muhammad-Bande recalled the consensus reached through the Paris Agreement to limit the rise in temperature to 2ºC above pre-industrial levels and efforts to hold it to 1.5ºC.

And yet, if current trends in global emissions continue, they will cause further warming; and humans will face increasingly severe and extreme weather events.

“Lands are being degraded. Forests, ecosystems and biodiversity are being lost. Our oceans are facing pollution, acidification and loss of coastal habitats”, he spelled out.

Let’s not ‘go down with the ship’

Risk reduction measures have the potential to “safeguard up to 280 million people at risk of displacement due to sea level rise”.

“It is our decision: to go down with this ship or to change course immediately”, he underscored. “This is the time to act”.

“We are defined by our actions, and every day we have a moral obligation to take action in favour of the next generation and beyond”, Mr. Muhammad-Bande concluded. “I am confident we will rise to this challenge”.

Join us live from Madrid for the opening of the High-Level Segment of #COP25 https://t.co/zTH6GLT8p4

On his first official trip as the Director General of the International Atomic Energy Agency (IAEA), Rafael Mariano Grossi highlighted the role that nuclear power can play in the global transition to clean energy.

“Variable renewables, such as solar and wind, are vital to the clean energy transition, but they alone cannot meet countries’ growing energy needs”, he maintained, adding that nuclear energy can “provide the continuous, low-carbon power to back up increasing use of renewables”.

Moreover, nuclear power can be “the key that unlocks their full potential by providing flexible support – day or night, rain or shine”, upheld the IAEA chief.

And many States believe that it will be very difficult, if not impossible, to achieve sustainable development and meet global climate goals without significant use of nuclear energy.

He pointed out that “nuclear power provides around one-third of the world’s low-carbon electricity and already plays a significant role in mitigating climate change”.

“Each year at COP we are told that the window of opportunity could close soon”, UN Climate Change Executive Secretary Patricia Espinosa said on the urgency of climate action.

Action for the most vulnerable

People around the world are being affected by one extreme weather event after another. But refugees, stateless people, and internally displaced often reside in climate change “hotspots”, leaving them exposed to secondary displacements, according to the UN refugee agency, UNHCR.

So Tuesday saw the timely launch by 12 international organizations of the Alliance for Hydromet Development, agreeing to strengthen the capacity of developing countries to deliver high-quality weather forecasts, early warning systems and hydrological and climate services.

Pointing out that “the science is clear”, World Meteorological Organization (WMO) Secretary-General Petteri Taalas, told COP25 that “ambitious climate action requires countries to be equipped with the most reliable warnings and best available climate information services”.

“The Alliance is the vehicle to collectively scale-up our support to the most vulnerable”, he concluded.

For her part, World Bank Vice President for Sustainable Development Laura Tuck underlined the important role of the Alliance.

“It’s good to see everyone formally coming together through this Alliance and committing to bridge the gap between developed and developing countries in the provision of hydromet and early warning services,” she said. “This will help ensure we are coherent, consistent, and efficient in the way we are supporting countries to prepare for climate risks and protect people.”

COP25 will lay the groundwork for next year’s defining climate change conference, when countries must submit new climate action plans under the Paris Agreement.