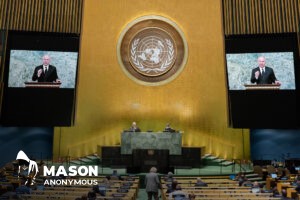 “If we have defeated the terrorists militarily, the war is far from won,” the President told the Assembly’s annual debate, being held virtually this year due to the coronavirus pandemic. Indeed, he said, Iraq’s war against terrorism was continuing.

Mr. Salih warned against underestimating the danger of terrorism and stressed the all too real possibilities “of its return and the reorganization of its ranks”, and added that “any complacency, or preoccupation with conflicts in the region, will be an outlet for the return of these deadly groups.”

He went on to denounce the “rampant corruption and interference” that had harmed his country’s national sovereignty. Such acts would also impede Iraq’s efforts to combat terrorism and extremism.

Mr. Salih stressed the need to isolate the corrupt elements involved in capital flight. Faced with the scourge of corruption, the President called for the creation of an international coalition on the model of the coalition against terrorism.

He further urged the international community to stand with Iraq so that the crimes committed against the Yazidis, including the crimes of genocide, do not happen again. He detailed his recent meeting with Yazidi women, during which they told him of “the indescribable suffering” they continue to endure.

Calling on developed countries to support developing ones, Mr. Salih stressed the need to fight misinformation, which jeopardizes the lives of millions. Early planning can guarantee equity in the distribution of a COVID‑19 vaccine, he said, stressing that the international community must prevent its distribution from becoming a commercial act.

Within the limited health‑care infrastructure resources of his country, he said, Iraq is fighting the pandemic, while continuing its ongoing battle against the scourges of terrorism and corruption.

Forty years of war, blockades and terrorism, he reflected, is the lamentable history that Iraq carries. The plummeting oil prices in the global market and the economic havoc wreaked by the pandemic have exacerbated this burden.

Around a year ago, the country saw a popular movement in which citizens expressed a desire for change and dialogue. Pointing to reforms undertaken in response, he said that a new Government was formed in 2020.

The Iraqi people wish to usher in a new political age, he said, noting the intention to hold early elections in 2021. Calling for technical assistance from the United Nations, he said, “we do not want Iraq to become a playground for external forces.”