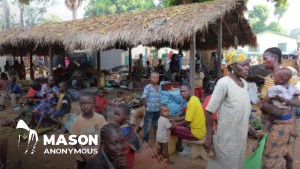 In a briefing, Mankeur Ndiaye, head of the UN Mission to the country, known by the French acronym, MINUSCA, made reference to the “cowardly killing” of 39 people by members of the “3R” armed group – one of the signatories to the accord – in the Ouham-Pendé region of the country on May 21, which led to some 12,000 people being displaced from their homes.

Following a joint mission of the UN, African Union and Economic Community of Central African States, the leader of the 3R group committed to collaborate with the investigations into the killings.

MINUSCA, Mr. Ndiaye told the Council, also launched a military operation in western CAR, designed to improve the protection of the civilian population, prevent new attacks or reprisals and stop armed activity in the region.

Following the operation, three members of 3R were arrested in connection with the May 21 killings. Nevertheless, he continued, the security situation remains fragile, with between 50 and 70 violations of the peace accord reported every week. These include violence against civilians, illegal taxes, and the occupation of public buildings.

Parties to the peace deal must commit to ending violence

All parties to the accord must commit to putting an end to all forms of violence, and to settling disputes through dialogue, he said. They must, as a matter of urgency, conform to security arrangements to which they have already agreed. A crucial step towards reducing inter-communal violence linked to transhumance – the seasonal movement of livestock from one grazing ground to another – is the creation of a special security unit.

The security sector, briefed the MINUSCA chief, is now more representative of the population, more professional and more efficient, thanks to efforts undertaken by the Government of CAR. A recruitment campaign for the police will take place in the coming months, following on from a recently-completed army recruitment campaign.

The people of CAR, expect a lot from peace, declared Mr. Ndiaye. They expect to be able to go about their business in peace, to have access to drinking water, to health care, education, jobs and justice. The conditions must therefore be created to bring about an environment in which the economy can improve, and in which young people can find jobs, thus preventing the creation of more armed groups.

However, the humanitarian situation, he continued, remains “disastrous”, which is putting the prospects for peace at risk: 2.9 million people, half of whom are children, need humanitarian assistance and protection, while 2.1 million face a lack of food security.

The peace process, said Mr. Ndiaye, must lead to improved access to humanitarian aid, and the creation of development activities in zones that are now stable.

Adequate support for 622,000 internally displaced people and 590,000 refugees from CAR, sheltering in neighbouring countries, is needed, and the UN’s 2019 humanitarian plan, which requires over $430 million, is currently insufficiently funded, with only 28 per cent of the total reached so far.

The MIUSCA chief pointed out that the many human rights violations that have taken place in the country must be addressed. National consultations on the creation of a Truth, Justice, Reparation and Reconciliation Commission will, he said, allow Central Africans to express their opinions on how victims can receive redress, and show the “path towards national reconciliation”.

Elections are also a crucial stage towards reinforcing democracy in CAR, warned Mr. Ndiaye. A delay in the adoption of the country’s electoral code could lead to a delay in the preparation of elections planned in 2020-2021.

He noted the creation of a political platform composed of opposition parties and civil society opposed to the peace process, and expressed his hope that opposition to the process will not lead to a rejection of peace, but instead constructive proposals in favour of the development of the country.