Joyce Msuya, Assistant Secretary-General for Humanitarian Affairs, told the 15-member Council that the real death toll is likely much higher than what has been confirmed so far, with so many of the most heavily-bombarded areas targeted by Russian forces, inaccessible to verify casualties.

“Cities, like Mariupol, Kharkiv, Chernihiv and many others – bustling and full of life just one month ago – are encircled, bombarded and blockaded,” she said, emphasizing that at least 99 children number among the dead and injured, as hospitals, homes and schools are destroyed.

‘Not even safe to bury the dead’ 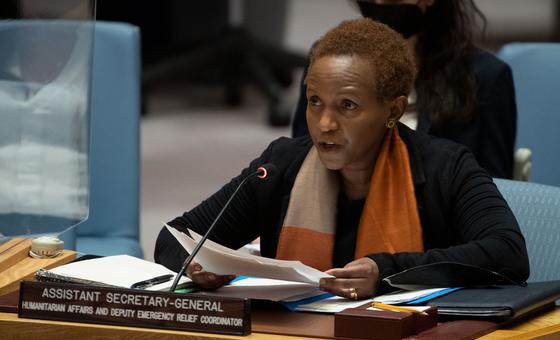 Providing an update on the humanitarian situation four weeks into the conflict, the Assistant Secretary-General noted that civilians in the encircled towns and cities lack food, water, medicine, electricity and heating.

“In some neighborhoods, it’s not even safe to bury the dead,” she said.

Meanwhile, more than 10 million people – including more than half of Ukraine’s children – have fled their homes.

That includes some 6.5 million who are internally displaced within the country, according to figures from the International Organization for Migration (IOM)

In response, the UN humanitarian system has scaled up its work dramatically.

Since 24 February, humanitarian organizations have reached around 890,000 people across Ukraine with food, shelter, blankets, medicine, bottled water and hygiene supplies.

On 18 March, after delays due to ongoing hostilities, the first UN-organized convoy reached the town of Sumy in northeast Ukraine, delivering food and supplies to some 35,000 people and helping to repair the town’s water system.

However, treacherous security risks and access challenges are hampering those efforts, with many routes disrupted and humanitarian convoys and workers frequently unable to pass due to shelling, fighting and landmines.

© UNICEF/Vincent Tremeau
At the border crossing between Ukraine and Moldova at Palanca, refugees stand in line

Also briefing the Council on Tuesday was David Beasley, Executive Director of the World Food Programme (WFP), who described the humanitarian situation in Ukraine as a “catastrophe on top of a catastrophe.”

As Ukraine transforms “from a breadbasket to a bread line,” he also warned of reverberating impacts on the global food supply, stressing that food insecurity in the Sahel, North Africa and the Middle East is likely to worsen and cannot be ignored.

Much of those regions’ supplies of wheat and other food staples comes from Ukraine and the Russian Federation, where it is currently planting season for maize. June and July are the harvest seasons for wheat crops.

Mr. Beasley stressed that the problem of food insecurity will be further compounded by a reduction in fertilizer-based products from the Russian Federation and Belarus, which is likely to result in a 50 per cent drop in yields in many countries.

“There will be difficult months ahead,” he warned.