Although diverse and inclusive workplaces generate greater productivity, innovation and well-being, ILO’s Transforming Enterprises through Diversity and Inclusion, finds that too little is being done to make them a reality – particularly inclusion of minority groups – leaving enterprises, workers and societies missing out on significant gains.

Yet too little is being done to promote them.

🆕 Check out our new report to learn more. https://t.co/SXpTotzNAJ

“An equal, diverse and inclusive workplace is a key driver of resilience and recovery,” said Manuela Tomei, Director, ILO Conditions of Work and Equality Department.

It gathers information from staff, managers, and senior executives encompassing diverse ages, genders, ethnicities, races, and religions in businesses of all sizes, throughout lower-middle income and upper-middle income economies.

The report found that a sense of workplace inclusion was more likely to be associated with seniority, as opposed to personal background or characteristics.

Ninety-two per cent of senior staff felt included, respected, and valued at work, compared to 76 per cent of lower-level respondents.

The workforce in medium-sized multinational companies were also more likely to feel positive, than those in small national enterprises.

Diversity and inclusion play a “critical role… in the high performance of the workforce, businesses, economies and societies globally,” the report says. “If inclusion remains a privilege experienced only by those at senior levels, enterprises risk missing out on…considerable benefits.”

Minorities missing at the top

Only a quarter of respondents reported that women made up a critical mass of 40 to 60 per cent of top management – and a third pointed out that there were no persons with disabilities at senior levels.

Some minority groups, which tended to be clustered in junior levels, also consistently reporter fewer positive experiences of being included.

“The COVID-19 pandemic exposed and exacerbated existing inequalities in our economies and societies,” said Ms. Tomei.

“An equal, diverse and inclusive workplace, is a key driver of resilience and recovery”.

Between July and September 2021, two-thirds of more than 12,000 employees in 75 countries surveyed throughout five regions acknowledged that since the start of the pandemic, the level of focus and action on workplace diversity and inclusion had increased.

A similar proportion said the pandemic had raised their expectations that employers should do more to promote diversity and inclusion.

The report says that the most likely way to influence enterprises to create sustainable and transformational change is by combining the business case for diversity and inclusion with policies, legislative frameworks and supportive enterprise values.

“It is this transformational approach to diversity and inclusion that makes significant contributions to overall business performance”.

Transforming Enterprises defines “inclusion” as the experience people have in the workplace and the extent to which they feel valued for who they are, the skills and experience they bring, and the extent to which they have a strong sense of belonging with others at work.
The report was compiled using data gathered by the Bureau for Employers’ Activities (ACT/EMP)  and the Gender, Equality, Diversity and Inclusion Branch (GEDI)  of the ILO, working with employer and business membership organizations and diversity networks.

“The ILO is working with constituents to improve levels of diversity and inclusion in workplaces,” Ms. France-Massin said. 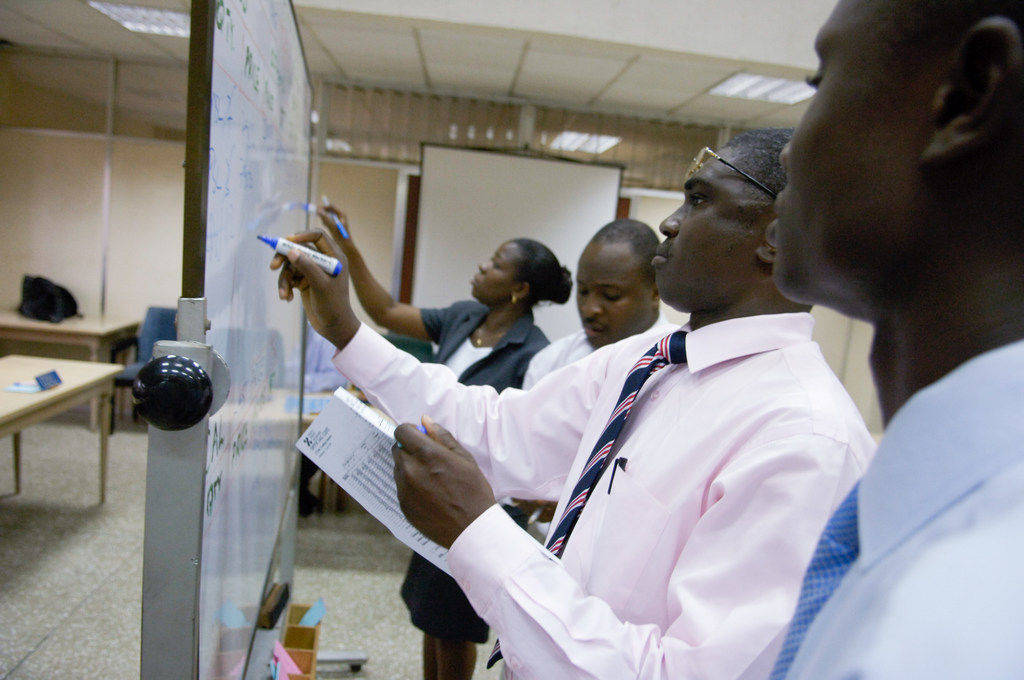 © World Bank/Jonathan Ernst
Traders work on the floor of the Ghana Stock Exchange in Accra, Ghana.