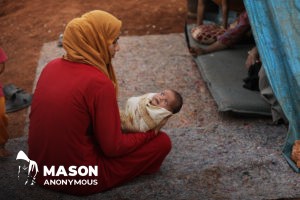 “On 26 July, the Office of the High Commissioner for Human Rights (OHCHR) identified at least 450 civilians who have been killed since late April – including more than a hundred in the last two weeks alone”, Mark Lowcock, the UN Under-Secretary-General for Humanitarian Affairs reminded Council members.

Many hundreds more have been injured, over 440,000 displaced and dozens of civilians killed or injured by shelling of the Security Council-listed terrorist group Hayat Tahrir al-Sham and the non-State armed groups associated with them.

He recounted the story of a surgeon at Idlib Central Hospital who said that while he lives at the top of the building, the patients are in the lower floors and basement, because that is where it is safest.

Days before speaking to the doctor, “a bomb landing 50 meters away blew out all the glass and windows of his room”, Mr. Lowcock relayed.

Today I briefed the @UN Security Council on behalf of Dr. Mohammed, his patients, the people of Idleb, and the rest of Syria. For the last 90 days, the Council has done nothing as the carnage continues.

“A day or so before that, another bomb had hit a gynecological facility 200 metres away”, he said, explaining that the hospital is in a deconflicted area, which was established through a Memorandum of Understanding between Russia and Turkey to separate pro-Government forces and militant opposition fighters.

Mr. Lowcock responded to a series of questions posed by the Council on 18 July, beginning with how OHCHR gets it information.

In addition to direct or verified sources, which are “triangulated, reviewed and confirmed”, he informed the members that “our teams on the ground tell us what they see” – as do partners.

“Testimony comes from those closest to the source, who are assessed by the UN as credible”, he continued. “We use imagery, including satellite imagery, or geotagged and time stamped pictures of medical facilities, that have been analyzed and assessed by the UN”.

And there are other sources, including media, humanitarian partners and UN agencies like the UN Children’s Fund (UNICEF), the World Health Organization (WHO), and the UN Population Fund (UNFPA).

“Then of course there is the testimony of the people of Idlib themselves”, he asserted. “I spoke yesterday by video link to two groups of displaced people in different parts of Idlib”, who said they “are being bombed every day by the Russians and the regime”.

When asked what they needed, the response was clear: “We just want the bombing to stop” because “we are afraid” and “just want to live in peace.”

Mr. Lowcock maintained that many of the millions of children aged eight to 12 had been “forced to flee with their families”.

“I asked if any of them go to school”, he said. “No. It’s not safe. They hit our schools”, was the response.

“We all know exactly what has been happening for the last three months” in Idlib, the humanitarian chief underscored. “There is no shortage of information”. 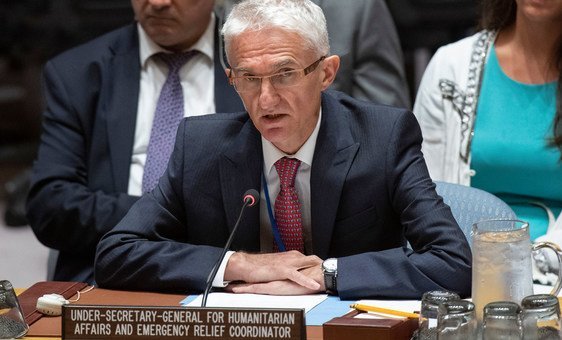 Mr. Lowcock then told the Council that through the deconfliction system, humanitarian agencies provide OCHA with information to identify “static civilian locations or humanitarian movements”, whose coordinates are then shared with International Coalition Forces, Turkey and Russia.

Whether that information is being used to protect civilian facilities or to target them is “an extremely important question”, he stressed, adding his conclusion that currently, “deconfliction is not proving effective in helping to protect those who utilize the system”.

“I have asked my team to meet again with the humanitarian organizations who would like their activities to be deconflicted to update them on the current situation and determine again whether we should continue to provide information to the parties on new sites or humanitarian movements”, he stated.

Turning to a 16 July letter saying that terrorist groups took over 119 mostly-unnamed hospitals in Idlib, therefore, they can no longer be considered healthcare centres or even civilian objects, the humanitarian chief negated the claims, as well as another accusation in the letter stating that there is no ambulance network left in the province.

His fourth point on whether the UN would pass information about attacks on civilians and civilian objects to the International Impartial and Independent Mechanism and Commission of Inquiry, he said “the answer is yes, we will do that, subject only to the proviso that those giving us sensitive information consent to it being passed on”.

The OCHA head spoke at length about the important humanitarian work being carried out and the needs that lie ahead.

“Some recent reports have claimed that UN humanitarian assistance reaches only those in areas not controlled by the Government”, he argued. “That is untrue”.

“Significant gaps in access still remain”, he said, noting his concern for 24,000 people in Rukban and calling “again” for access to reach them.

“I also call on all Member States to de-escalate growing tensions along the borders in the northeast and avoid any actions that may cause further displacement, casualties and suffering.

And on Idlib, he enlightened the Council that this month, “cross-border aid aims to reach some 1.2 million people”, adding that “in the current circumstances, there is no other way to provide adequate support to the three million civilians who are in the area”.

“You in this Security Council have ignored all the previous pleas you have heard”, Mr. Lowcock spelled out. “You know what is happening and you have done nothing for 90 days as the carnage continues in front of your eyes”.

“Are you going to…do something about it?”, asked the UN humanitarian chief.