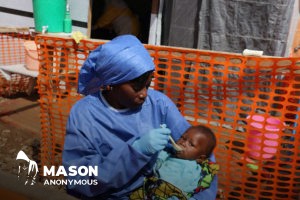 One-year after the beginning of the complex outbreak in the volatile eastern part of the DRC – and ten days since the “alarming confirmation of a first case in Goma, the region’s biggest city, with some two million people” – WFP’s Spokesperson Herve Verhoosel said that the UN agency is “stepping up preparations for a potential further escalation of the epidemic”.

Over the next six months, WFP will nearly double its food assistance and nutritional support to 440,000 Ebola-affected people in DR Congo, Mr. Verhoosel announced, adding that this would include “primarily contacts of victims and their families, as well as confirmed and suspected cases”.

According to estimates, expected new contacts are at roughly 50 per case, which equals a total of 75,000 contacts in the next five months.

Speaking to journalists in Geneva, he said that given the challenges of “tracing contacts in the conflict zone that is eastern DRC, food distributions are key to the containment effort, helping as they do to limit the movement of people who could spread the disease, and to the vital vaccination drive”.

Since WFP distributions are carried out at agreed sites for “contacts” of Ebola-affected people, families receive one-week rations, encouraging them to come back to the distribution site where they can also receive a medical check-up at least once per week, over the course of 28 days.

WFP’s regional response also includes efforts to expand the fleet of aircraft dedicated to the Ebola campaign, in support of frontline responders, including UN agencies and NGO personnel.

Mr. Verhoosel said that “with popular mistrust of responders still widespread and hampering containment, WFP is intensifying efforts to encourage community cooperation”. In some cases, “beneficiaries are afraid to even be seen with WFP food because many have been threatened”, he added.

To respond to those challenges, WFP is planning to increase the number of primary schools in Ebola-affected areas of DRC to provide with nutritious hot lunches, which typically consists of rice, beans, fortified vegetable oil and salt.

“Provision of school meals encourages communities to cooperate with responders. For many pupils, this is the main – if not the only – meal of the day in a region of pronounced chronic malnutrition. The number of children slated to receive school meals to rise from 17,000 to 70,000”, WFP’s Spokesperson said.

UN agencies, including WFP and the World Health Organization (WHO), are hoping that the designation earlier this month of Ebola as a Public Health Emergency of International Concern will speed up the release of crucial funding to combat it.

WFP requires $50 million over the next six months to implement its response and preparedness actions in DRC and neighbouring countries: Uganda, Rwanda, Burundi and South Sudan.

The agency has set up 69 screening and isolation units at the major border crossings between DRC and the priority countries, and in hospitals.

Earlier this week, the World Bank announced the mobilization of $300 million to scale up support for the global response to the Ebola epidemic in the DR Congo.