Speaking to representatives of the press in the capital, Kinshasa, on Monday, Mr. Guterres said that, in a meeting earlier in the day with Félix Tshisekedi, the President of DRC, he had expressed his conviction that the country will see “a government that wants to transform the country, an opposition that also plays an important role in political life, with greater respect for human rights and with a vision for the future of Congo”.

The UN chief called on the international community to support the Congolese people and authorities in seizing the opportunity to strengthen their institutions; develop DRC sustainably, inclusively, and in security; and effectively respond to humanitarian problems.

The UN Mission in DRC (MONUSCO) will strengthen its capacity to tackle armed ADF militants, announced the Secretary-General, and increase its cooperation with the DRC Armed Forces, with the aim of better responding to the security concerns of the population. 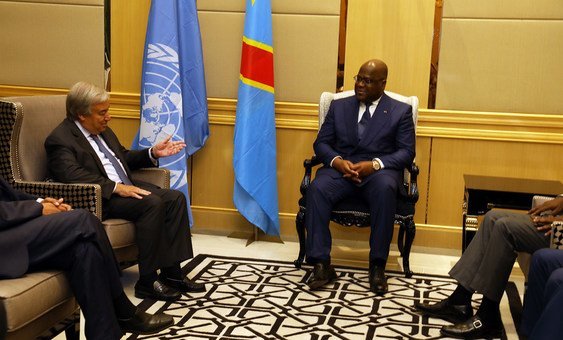 Mr. Guterres appealed to Congolese members of armed groups to lay down their weapons and integrate into the community, noting that the UN will do more to assist the demobilization, disarmament and reintegration of former combatants.

The UN, he added, will also intensify cooperation in the area of inclusive and sustainable development: “Congo has a huge wealth potential. This potential must serve the interests of the Congolese people and in the humanitarian field”.

The ultimate aim of the United Nations, continued the Secretary-General, is that MONUSCO will no longer be necessary, and that it can be replaced with a country team that concentrates on working with the government for the development and well-being of the Congolese people.

This, however, is a long-term aim and Mr. Guterres gave his assurance that the UN remains engaged with the Democratic Republic of the Congo and “will not abandon the Congolese people”.