Special Representative on Sexual Violence in Conflict, Pramila Patten, and her counterpart on Children and Armed Conflict, Virginia Gamba, lauded the Cour Militaire Opérationnelle of North Kivu for the conviction and sentencing of Ntabo Ntaberi Sheka – part of the Nduma Defence of Congo armed group (NDC-Sheka) – on charges that included rape, sexual slavery and the recruitment of children.

Ms. Gamba called the verdict “an important victory for those who seek justice for grave violations against children” in the DRC and elsewhere.

“It is a formidable example showing that no individual, no matter how powerful, is immune from being held accountable for those violations”, she added. 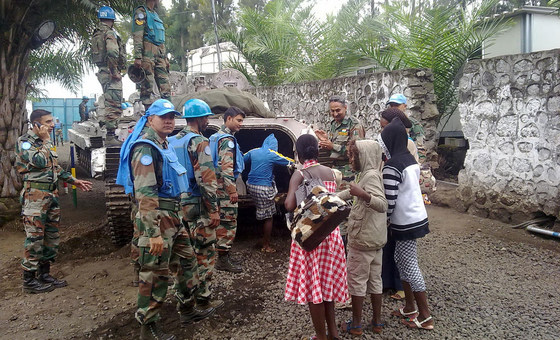 He and co-conspirators, including Séraphin Nzitonda Habimana, also known as Lionceau, of the so-called Democratic Forces for the Liberation of Rwanda (FDLR), were tried for mass crimes committed between 2010 and 2017.

Among the violations were attacks in 2010 against civilians in Walikale territory in which the UN Joint Human Rights Office said that at least 387 civilians suffered sexual violence. The Security Council condemned the assaults in the strongest terms and called for the perpetrators to be held accountable and prosecuted.

Thereafter, Mr. Sheka was added to the Security Council sanctions list for the DRC. Following a two-year trial that began in 2018, both defendants were found guilty and sentenced to life imprisonment.

“My mandate has pursued justice for Messrs. Sheka and Lionceau’s crimes with a coalition of national and international partners, for the sexual violence they have committed for over a decade”, explained Ms. Patten. “The verdict sends a strong signal that impunity for sexual violence in Congo will not be tolerated”.

Both UN envoys praised the brave victims who came forward to testify, their attorneys and the Congolese prosecutors who pursued the case with diligence.

They highlighted the broad coalition of national and international actors who worked together to ensure that justice was done, which they maintained stands as a model for the future.

Moreover, the Special Representatives welcomed the UN’s technical support, particularly that of its Stabilization Mission in the DRC (MONUSCO) as well as the military justice authorities that contributed to the outcome.

“North Kivu is still subject to insecurity and sexual violence, but this verdict is a clear message to perpetrators that you will be brought to justice no matter how long it takes”, said Ms. Patten.

Ms. Gamba added, that “through this verdict, once again parties to conflict are reminded that violations against children cannot be overlooked, and that sooner or later justice will prevail”.

The Special Representatives also called upon the DRC Government to provide reparations and support to victims of Mr. Sheka’s crimes who still suffer long after the violations.