Briefing the Security Council during open videoconference proceedings, Huang Xia urged the international community not to let up on its support for the continent-spanning region that includes Burundi, Democratic Republic of the Congo, Rwanda, South Sudan and Uganda, among several other nations.

Citing data from the World Health Organization (WHO), the Special Envoy said that the novel coronavirus has so far claimed 131 lives in the Great Lakes region among more than 4766 confirmed cases – but is spreading at a “moderate rate” compared to other parts of the world.

So far, strict travel restrictions and quarantine measures seem to be keeping the spread of the deadly virus at bay, he said. But the economic impact is already significant, with many key sectors – including agriculture, mining and transportation – at a near-standstill.

“In the long term, these preventative measures – combined with the reallocation of resources to address the health crisis – are likely to weaken the already fragile economies, with possible implications for peace, security and development in the region”, Mr. Huang told Council members via video-teleconference.

“The countries of the region, some of which are emerging from decades of conflict, will need steadfast support from members of the international community in order to deal with – and, in a sustainable manner, recover from – the pandemic and its consequences.” The Special Envoy was briefing the Council on the Secretary-General’s latest report on the implementation of the Peace, Security and Cooperation Framework for the

Democratic Republic of the Congo and the Region, concluded in 2013 and signed by 13 African nations. 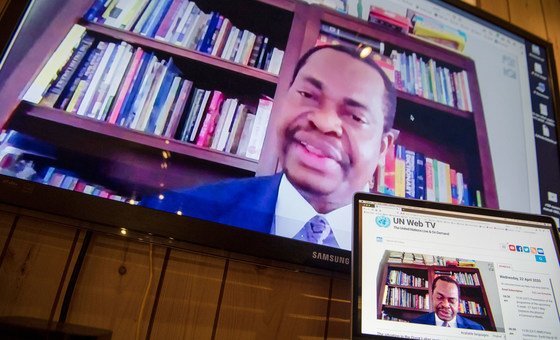 Minister Counsellor Paul Losoko Efambe Empole of the Democratic Republic of the Congo speaks during the open video conference with Security Council members in connection with the Great Lakes region., by UN Photo/Eskinder Debebe

While COVID-19 is, like elsewhere, forcing countries in the region to redirect their priorities, Mr. Huang pointed to several positive developments, including a peaceful political transition in the Democratic Republic of the Congo, progress towards normalizing relations between Rwanda and Uganda and the formation of a unity Government in South Sudan.

Progress has also been made in the fight against armed groups operating in the eastern Democratic Republic of the Congo, he added, with increased coordination and exchange of information between the armed forces of that country, Burundi, Rwanda and Uganda.

Nevertheless, the activities of armed groups – including the illicit exploitation of natural resources – undoubtedly remains the biggest challenge, the Special Envoy said, diminishing trust among countries in the region and fuelling a humanitarian crisis that leaves civilians paying the highest price.

He went on to urge the Council to keep a close watch on electoral processes in the region. Elections can be a source of unrest at times, but hopefully, upcoming polls – particularly in Burundi and the Central African Republic – will be an opportunity to consolidate democratic gains and reinforce stability, he said.

In press elements issued after today’s meeting, the representative of the Dominican Republic, Council President for April, said that Council members welcomed positive developments and commended the steps taken by regional leaders to deescalate tensions, build confidence and advance cooperation.

Council members also called for stronger coordination among Governments in the region in the fight against COVID-19, vigilance against a potential resurgence of the Ebola virus and an immediate cessation of hostilities by all armed groups.