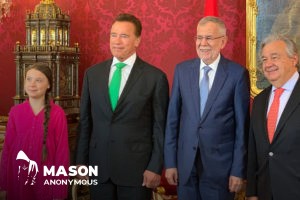 The idea that subsidizing fossil fuels is a way to improve people’s lives could not be more wrong, said the UN chief in the Austrian capital, Vienna, because it means spending taxpayers’ money to “boost hurricanes, to spread droughts, to melt glaciers, to bleach corals: to destroy the world.”

Mr. Guterres went on to call for the decarbonization of urban infrastructure, a halt to coal plants, and the promotion of sustainable consumption and production: “in short, we need a green economy, not a grey economy.”

In the lead up to the UN Climate Summit this September, the Secretary-General has enlisted the President of France, the Prime Minister of Jamaica and the Emir of Qatar to mobilize international support to secure the $100 billion goal agreed by UN Member States at the Paris climate conference in 2015, necessary for advancing climate mitigation and adaptation in the developing world.

Investors need to stop “financing pollution”, scale up green ventures and increase lending for low-carbon solutions”, he insisted, adding that the private sector and investment communities must support a “bold and ambitions climate agenda”, because climate action is not only good for people and the planet, it can also be good for business.

As taxpayers, I believe we would like to see our money back rather than see it used to destroy the world. My remarks at @R20_AWS: https://t.co/0BAWMuilXd #ClimateAction pic.twitter.com/dAB43HMF2m

‘Silver lining to the looming cloud’

Recounting his recent trip to Tuvalu, a low-lying island state in the South Pacific that risks being inundated by rising sea levels, Mr. Guterres highlighted the fact that “rarely a day goes by,” without news of yet another disaster, such as floods, droughts, wildfires and extreme storms.

However, there is a “silver lining to the looming cloud”, because, although the current situation is extremely serious, the shift to a green economy would see profound benefits for societies around the world, with cleaner water and air, less pollution, more chemical-free agriculture and reduced biodiversity loss.

Regional action is ‘key to addressing the climate crisis’

The R20 Austrian World Summit is a long-term initiative to help regions, states and cities to implement the Sustainable Development Goals, and meet the global climate protection targets outlined in the Paris Agreement to limit climate change. R20 aims to develop the summit to become the most important European meeting place for climate action solutions.

One of the other high-profile speakers at the opening session of the event was outspoken Swedish climate activist Greta Thunberg, who initiated the school strike for climate movement in November 2018, at the age of 15.

Ms. Thunberg said that millions of children have been gaining lots of attention for the climate emergency, but they, like scientists, are not leaders, unlike many of the politicians, CEOs and celebrities attending the Summit: “people listen to you, and are influenced by you. You have an enormous responsibility, a responsibility that most of you have failed to take.”

Climate change is an emergency, the biggest crisis that humanity has ever faced Greta Thunberg, youth climate activist

Such influencers, she added, cannot rely on people to read between the lines or search for scientific information. They must explain repeatedly, no matter how uncomfortable or unprofitable that may be. Ms. Thunberg reminded the audience that, although climate change may be a chance for green growth, it is primarily “an emergency, the biggest crisis that humanity has ever faced.”

The work of Governor Schwarzenegger and the R20 coalition, in highlighting the importance of climate action at a “sub-national” city and regional level, was praised by the UN chief, who described sub-national action as being “key to addressing the climate crisis”, not only because regional and city governments are closer to the people, but because “regions and cities are the main engines of the world economy.”