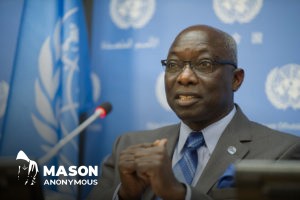 Speaking at the end of the second Global Summit on Religion, Peace and Security, at UN headquarters in Geneva, Adama Dieng noted that in the wake of dozens killed inside Sri Lanka churches, a synagogue attack in California, and killings inside a church in Burkina Faso, the threat of another genocide somewhere, was only growing larger.

Press statement on the official visit of the High Representative for #UNAOC @MiguelMoratinos to Sri Lanka and his meetings with the political leadership, religious leaders and CSOs in Colombo. https://t.co/OvjCgwjf7D #Commit2Dialogue pic.twitter.com/2uIIo45iWy

More moderate politicians need to be “speaking out” too, and getting “better mobilized, but sometimes you see also the political opportunism, even in those camps”, he said.

This needed to be addressed fast he said, especially in Europe, where the same signs of growing, militant nationalism, that allowed the rise of violent regimes based on racist ideology in the 1930s, can be seen today.

“We need to bring an end to this cynical, politicians’ discourse” said Mr. Dieng. “Big massacres start always with small actions and language”, he warned, noting that the Holocaust against the Jews perpetrated by the Nazis, was preceded by hate speech, and hate crimes, that robbed Jews of their basic humanity.

“We witnessed the same in Rwanda” he said, in 1994, against the Tutsis and others, where they became known as “snakes”. “It started with those words, and what we are seeing today, is pretty close”.

In the wake of the deadly attacks which left more than 250 dead in churches and hotels in Sri Lanka on 21 April, the UN High-Representative for the UN Alliance of Civilizations (UNAOC), Miguel Moratinos, made the first visit by a high-level UN official to the country on Tuesday, expressing support for the Government’s efforts to combat terrorism and violent extremism.

Mr. Moratinos met top politicians, religious leaders, representatives of civil society and the UN Resident Coordinator as well as the UN Country Team, said a statement released by UNAOC. In his meeting with President Maithripala Sirisena, the High-Representative conveyed “his personal deepest sympathies as well as the heartfelt condolences of the UN Secretary-General.

“You are not alone” he told the President, who expressed his gratitude and appreciation for the visit and support of the High-Representative. President Sirisena said he was “determined to move forward and restore security and safety” to his country.

Mr. Moratinos said the UN stood ready “to support those efforts to help in restoring harmony, unity and social cohesion”, stressing that there is an urgent need to find a long-term solution to the problem of asylum seekers and refugees in Sri Lanka to ensure their safety and well-being. Some 1600 refugees and asylum seekers mainly Ahmadi Muslims had been under attack in the wake of the Easter bombings.

High Representative Moratinos – who has officially been tasked by UN chief António Guterres to lead an initiative to help ensure the safety of religious sanctuaries  – also met Prime Minister Ranil Wickramasinghe, with whom he exchanged views on the current efforts undertaken to restore unity and peaceful co-existence within Sri Lankan society.

In response he has set two “urgent initiatives” in motion; the drawing up of UN plan of action to “fully mobilize” the system to tackle hate speech, led by Special Adviser on the Prevention of Genocide, Adama Dieng, and an effort being led by the High Representative for the Alliance of Civilizations (UNAOC) Miguel Moratinos, to help ensure the safety of religious sanctuaries.