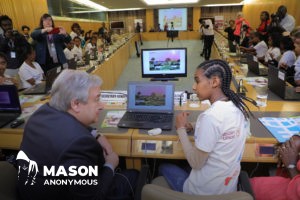 That’s according to UN Secretary-General António Guterres, in his message on Saturday to mark international Africa Day. Earlier this year, the UN chief was in the Ethiopian capital Addis Ababa, where he spent time with schoolgirls from 34 different African nations, who were learning to code.

On #AfricaDay, I encourage all countries to keep the #ZeroHunger vision at the top of African minds & hearts.

Due to conflicts exacerbated by #climate hazards, 257 million people are still hungry in the continent, & #overweight and #obesity are growing fast. pic.twitter.com/HPH2lBIkII

“They were not only developing their skills; they were challenging gender stereotypes and embracing the inclusive digital technology that will be critical to take the continent towards a low carbon, climate resilient future”, he said.

“The boundless energy and optimism of Africa’s young people are propelling the continent into a new era of sustainable development”, he added through the implementation of the African Union’s “visionary” Agenda 2063 for the continent, which is aligned closely with the 2030 Agenda for Sustainable Development, agreed by all the world’s nations in 2015.

Africa Day marks the 56th anniversary of the founding of the AU: “Since I assumed office in 2017”, said Mr. Guterres, “I have prioritized the strategic partnership between the United Nations and the African Union. I am proud to say there has been a quantum leap in our cooperation, from the institutionalization of the annual United Nations-African Union Conferences, to the new joint AU-UN Frameworks on peace and security and sustainable development, and the Joint Declaration on cooperation for African Union-led peace support operations.

“We are providing strong support to AU initiatives on prevention and mediation, including ‘Silencing the Guns by 2020’ and the African Women Leaders Network”, said the UN chief.

With the mutual focus on ending poverty, he said the UN and AU were “working closely together on mainstreaming the 2030 Agenda and Agenda 2063 in national development plans and cooperating on unlocking new opportunities from the African Continental Free Trade Area.”

He concluded saying that the renewed emphasis on the UN-AU strategic partnership “is already producing results. Let us build on these strong foundations to make our cooperation more effective, efficient and mutually-reinforcing, based on the principles of African ownership, mutual respect, complementarity and interdependence.”