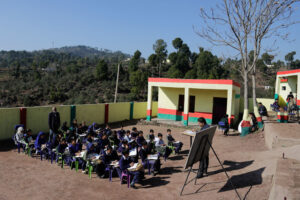 Mr. Parvez has documented serious human rights violations in Indian-administered Jammu and Kashmir, including enforced disappearances and unlawful killings, they said, and has faced reprisals reportedly for sharing information with the UN.

"We regret that the Government continues to use #UAPA to restrict fundamental freedoms in Indian-administered Jammu & Kashmir".

He was arrested in November by the National Investigation Agency (NIA) on charges related to conspiracy and terrorism.

“We are concerned that one month after Mr. Parvez’s arrest, he is still deprived of liberty in what appears to be a new incident of retaliation for his legitimate activities as a human rights defender and because he has spoken out about violations,” the rights experts said.

“In view of this context of previous reprisals, we call on the Indian authorities to immediately release him and ensure his rights to liberty and security.”

Mr. Parvez is detained at the Rohini Jail Complex in Delhi, which the experts described as among the most overcrowded and unsanitary prisons in the country, posing immediate risk to his health and safety, in particular from COVID-19.

He was arrested on 22 November under Indian counter-terrorism legislation, the Unlawful Activities Prevention Act (UAPA).

Introduced in July 2019, the Act allows the authorities to designate any individual as a terrorist without the requirement of establishing membership or association with banned groups.

The rights experts said the UAPA has resulted in a “worrisome rise” in the number of arrests in India, and especially in Indian-administered Jammu and Kashmir.

“We regret that the Government continues to use the UAPA as a means of coercion to restrict civil society’s, the media’s and human rights defenders’ fundamental freedoms in Indian-administered Jammu and Kashmir as well as in the rest of the country. We therefore once again urge the Government to bring this legislation in line with India’s international legal obligations under human rights law,” they said.

Mr. Parvez was brought before a court in Delhi on 30 November and 4 December, when it was decided he should be transferred from NIA custody to judicial custody.

This Thursday, the NIA Special Court may decide on another extension of his detention for a further 90 days, the experts said. If convicted, he could face up to 14 years in prison, or even the death penalty.

The rights experts who issued the statement were appointed by the UN Human Rights Council in Geneva.

They report to the Council on specific country situations or thematic issues, such as the situation of human rights defenders.

These Special Rapporteurs, independent experts and members of working groups are not UN staff, nor are they paid by the Organization.