Increased funding was the main reason that famine was prevented two years ago, but this year only 30 per cent of promised donations have come through, said Mark Lowcock, the UN’s top humanitarian official.

Parents in Yemen are unable to feed their children any more. Mohammed told me, every night his children ask him: “Daddy, where is the food – when is it coming?” He doesn’t have an answer for them. He’s hoping powerful Security Council members will help.https://t.co/ZODOVhlqr8 pic.twitter.com/48K576XauD

Choosing not to help

“Unfortunately, those who are in a position to help – and who have a particular responsibility to do so – are mostly choosing not to,” he said, emphasizing that more than 9 million people have been affected by deep cuts to aid programmes.

Several donors – including Saudi Arabia, the United Arab Emirates and Kuwait, who have a particular responsibility – have, unlike recent years, given nothing so far to the $2.41 billion United Nations humanitarian response plan.

Those three countries are members of the Western and Saudi-backed coalition that is supporting the Government of Yemen, led by Abd-Rabbu Mansour Hadi, against the partially Iranian-backed group Ansar Allah, as the Houthis are formally known.

The UN ranks Yemen as the world’s most serious humanitarian crisis, the result of five years of conflict, disease, economic collapse and a breakdown of public institutions and services – leaving a staggering 80 per cent of its population of 30.5 million, dependent on aid.

“Continuing to hold back money from the humanitarian response now will be a death sentence for many families,” relief chief Lowcock said, calling on all donors to pay their pledges and increase their funding.

Painting a grim picture, he said that the Houthis’ closure of the Sana’a international airport to UN and other humanitarian flights – blamed on fuel shortages – are having “severe humanitarian consequences”.

Some 100 metric tonnes of humanitarian cargo were due to fly into Sana’a in the coming weeks, including essential vaccines and medical supplies, he said, adding that a rapid solution is essential to keep aid efforts up to scale.

Slipping off the road to peace: Griffiths

Martin Griffiths, the UN’s Special Envoy for Yemen, updating the Council on political developments, said that increased fighting – particularly around the northern city of Ma’rib – alongside greater humanitarian needs and the COVID-19 pandemic, mean that Yemen is slipping away from the road to peace. 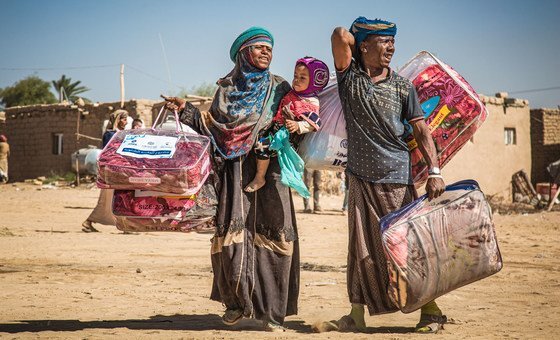 A displaced family in Marib, Yemen, carries a winter aid package back to their shelter., by IOM

“That doesn’t mean that together we cannot turn the corner and move back towards finding a solution to this conflict, but it requires the parties to choose”, said Mr. Griffiths, who last week sent the two sides a fresh draft of a joint declaration that would call for a nationwide ceasefire, economic and humanitarian confidence-building measures, and the resumption of peace talks.

Both briefers also discussed the saga of the oil storage tanker FSO Safer, the subject of a special Council meeting in July, which is threatening to spill more than 1 million barrels of light crude into the Red Sea, triggering a massive environmental disaster.

The Houthis have agreed in principle to UN technical experts to board the delipidated former supertanker, take stock of its condition and make essential repairs, but they have yet to issue the required permits.

Mr. Lowcock reported that the UN team has submitted a revised proposal for the Safer, moored off the Houthi-controlled port of Ras Issa, and held several rounds of constructive technical discussions with the de facto authorities.

“Frustrating as the endless delays have been, we are not giving up and we hope the new proposal will be quickly approved so work can start,” he said.