Gender-based violence (GBV), the most pervasive violation of human rights, is neither natural, nor inevitable, and must be prevented.

Marking the 16 Days of Activism to combat violence against women and girls, UN Women is showcasing the voices of five survivors, each of whose names has been changed to protect their identity. Be forewarned that each character sketch includes descriptions of gender-based violence.

‘Convinced’ she would be killed

From the Argentine province of Chaco, 48-year-old mother of seven, Diana suffered for 28 years before finally deciding to separate from her abusive partner.

At first, she hesitated to file a police complaint for fear of how he might react, but as she learned more about the services provided by a local shelter, she realized that she could escape her tormentor. She also decided to press charges.

Leaving was not easy, but with the support of a social workers, a local shelter and a safe space to recover, Diana got a job as an administrative assistant in a municipal office.

“I admit that it was difficult, but with the [mental health] support, legal aid and skills training, I healed a lot,” she explained.

Essential services for survivors of domestic violence are a lifeline.

“I no longer feel like a prisoner, cornered, or betrayed. There are so many things one goes through as a victim, including the psychological [persecution] but now I know that I can accomplish whatever I set my mind to”.

Diana is among 199 women survivors housed at a shelter affiliated with the Inter-American Shelter Network, supported by UN Women through the Spotlight Initiative in Latin America. The shelter has also provided psychosocial support and legal assistance to more than 1,057 women since 2017.

Survivor now ‘excited about what lies ahead’

Meanwhile, as the COVID-19 pandemic swept through Bangladesh, triggering a VAWG surge, many shelters and essential services shut down

Romela had been married to a cruel, torturous man.

“When I was pregnant, he punched me so hard I ended up losing my baby…I wanted to end my life”, she said.

She finally escaped when her brother took her to the Tarango women’s shelter, which in partnership with UN Women, was able to expand its integrated programme to provide safe temporary accommodations, legal and medical services, and vocational training to abused women who were looking for a fresh start.

Living in an abusive relationship often erodes women’s choices, self-esteem and potential. Romela had found a place where she could live safely with her 4-year-old daughter.

Opening a new chapter in her life, she reflected, “other people always told me how to dress, where to go, and how to live my life. Now, I know these choices rest in my hands”.

“I feel confident, my life is more enjoyable,” said the emancipated woman.

Tarango houses 30–35 survivors at any given time and delivers 24/7 services that help them recover from trauma, regain their dignity, learn new skills, and get job placement and a two-month cash grant to build their economic resilience.

“Our job is to make women feel safe and empowered, and to treat them with the utmost respect and empathy,” said Programme Coordinator Nazlee Nipa.

UN Women/ Fahad Kaizer
Romela escaped her abusive marriage when her brother took her to a women’s shelter in Bangladesh.

Goretti returned to western Kenya in 2001 to bury her husband and, as dictated by local culture, remained in the family’s homestead.

“But they wouldn’t give me food. Everything I came with from Nairobi – clothes, household items – was taken from me and divided between the family,” she recounted.

For nearly 20 years after her husband’s death, Goretti was trapped in a life of abuse until her in-laws they beat her so badly that she was hospitalized and unable to work.

Afraid to go to law enforcement, Goretti instead reached out to a local human rights defender, who helped her get medical attention and report the case to the local authorities.

However, she quickly discovered that her in-laws had already forged with the police an agreement in her name to withdraw the case.

“But I cannot even write”, Goretti said.

Human rights defenders in Kenya are often the first responders to violations, including GBV. Since 2019, UN Women and the UN Office of the High Commissioner for Human Rights (OHCHR) have been supporting grass-roots organizations that provide legal training and capacity-building to better assist survivors.

In addition to reporting the issue to local police and the courts, human rights defender Caren Omanga, who was trained by one of these organizations, also contacted the local elders.

“I was almost arrested when confronting the officer-in-charge”, Ms. Omanga explained. But knowing that the community would be against Goretti, she started “the alternative dispute-resolution process, while pushing the case to court”.

Finally, with her case settled out of court, Goretti received an agreement granting her the property and land title that she had lost in her marriage dowry, and the perpetrators were forced to pay fines to avoid prison.

“It is like beginning a new life after 20 years, and my son is feeling more secure… I’m thinking of planting some trees to safeguard the plot and building a poultry house”, she said.

At age 14, Milena was raped by her boyfriend in Chisinau. She was unaware that her violation was a sexual assault and continued to see her abuser for another six months before breaking up. Then she tried to forget it.

“This memory was blocked, as if nothing happened”, until two years later, upon seeing an Instagram video that triggered flashbacks of her own assault, she said.

Almost one-in-five men in Moldova have sexually abused a girl or a woman, including in romantic relationships, according to 2019 research co-published by UN Women.

Determined to understand what had happened to her, Milena learned more about sexual harassment and abuse, and later began raising awareness in her community.

Last year, she joined a UN Women youth mentorship programme, where she was trained on gender equality and human rights and learned to identify abuse and challenge sexist comments and harassment.

Against the backdrop of cultural victim-blaming, which prevents those who need it from getting help, the mentoring programme focuses on feminist values and diversity, and addresses the root causes of the gender inequalities and stereotypes that perpetuate GBV and discrimination.

“The programme has shown that youth activism and engagement is key to eliminating gender inequalities in our societies”, explained Dominika Stojanoska, UN Women Country Representative in Moldova.

A 2019 national survey revealed that only three-out-of-100 sexual violence survivors in Morocco report incidents to the police as they fear being shamed or blamed and lack trust in the justice system. 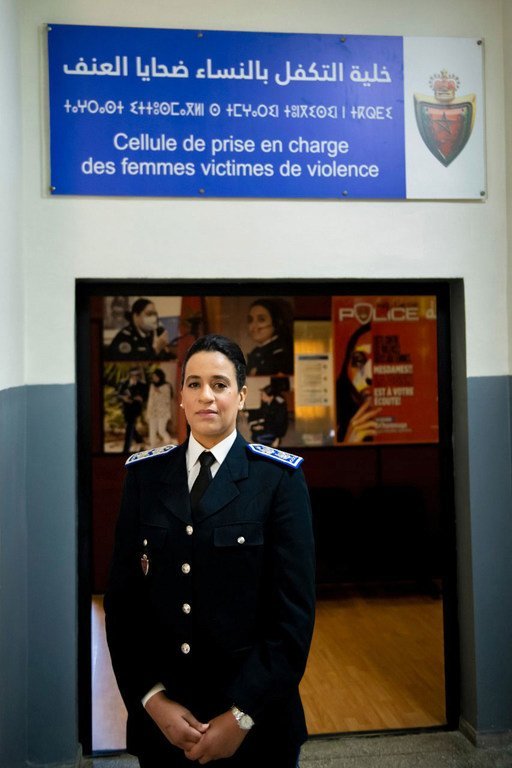 Layla began a relationship with the head of a company she worked for. He told her he loved her, and she trusted him.

“But he hit me whenever I disagreed with him. I endured everything, from sexual violence to emotional abuse…he made me believe that I stood no chance against him”, she said.

Pregnant, unmarried and lonely, Layla finally went to the police.

To her great relief, a female police officer met her, and said that there was a solution.

“I will never forget that. It has become my motto in life. Her words encouraged me to tell her the whole story. She listened to me with great care and attention”, continued Layla.

She was referred to a local shelter for single mothers where she got a second chance.

Two years ago, she gave birth to a daughter, and more recently completed her Bachelor’s Degree in mathematics.

“I was studying while taking care of my baby at the single mother’s shelter”, she said, holding her daughter’s hand.

UN Women maintains that building trust and confidence in the police is an integral part of crime prevention and community safety.

When professionally trained police handle GBV cases, survivors are more likely to report abuse and seek justice, health and psychosocial services that help break the cycle of violence while sending a clear message that it is a punishable crime.

Over the past few years, the General Directorate of National Security, supported by UN Women, has restructured the national police force to better support women survivors and prevent VAWG.

“It takes a lot of determination and courage for women to ask the police for support”, said Saliha Najeh, Police Chief at Casablanca Police Unit for Women Victims of Violence, who, after specialized training through the UN Women programme, now trains her police officers to use a survivor-centred approach in GBV cases.

As of 2021, 30 senior police officers and heads of units have been trained through the programme.

“Our role is to give survivors all the time they need to feel safe and comfortable, and for them to trust us enough to tell their story”, she said.

Prompted by the COVID-19 pandemic, Morocco has also expanded channels for survivors to report and access justice remotely through a 24-hour toll-free helpline, an electronic complaints mechanism, and online court sessions.

These stories were originally published by UN Women.