Discrimination against women and girls occurs in many different forms, across the world. These include laws that limit women’s sexual and reproductive rights, criminalize people for their gender identity or sexual orientation, or for transmitting HIV.

UNAIDS has outlined several societal changes that need to take place, to end discrimination and help in the fight against AIDS.

These include ensuring equal participation of women in political life, uphold human rights for women, and guaranteeing them economic justice, which includes ending the ongoing gender pay gap.

Violence against women must end, and laws that protect women form violence must be put in place and respected, with policies to support and protect survivors of violence. 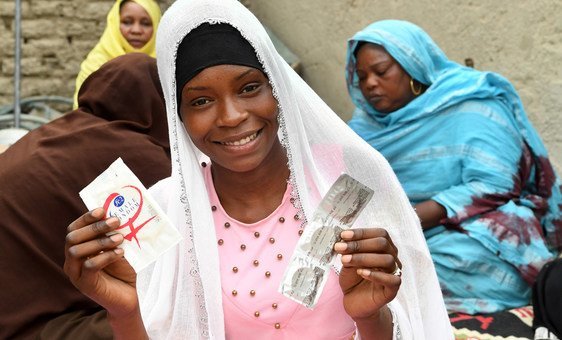 In the center of Chad, 19-year-old Achta holds up condoms during an HIV awareness-raising session in her Moussoro community. (March 2019), by © UNICEF/Frank Dejong

Health care must be available, without any stigma, discrimination or barriers, and care for women must respect their autonomy, with guaranteed sexual and reproductive health and rights.

Any age of consent for health services should be lifted, and married women should not need the permission of their spouse to access care.

UNAIDS also calls for free education for all, and an end to the large gender gap which still exists in access to education, and a response to climate change that takes into account the fact that women are disproportionately affected, and are particularly vulnerable to sexual and gender-based violence during climate-related emergencies.

Ms. Byanyima, who has lost family members to AIDS, said that it can only be beaten if the international community takes on social and economic injustices faced by women and girls, and spurs scientific innovation to help those living with the disease.

AIDS is the biggest killer of women aged 15-49. For UNAIDS, gender-based violence, inequality and insecurity must end, and women and girls must have equal access to education, health and employment, if AIDS is to be beaten by 2030.

In addition, society must be transformed so that there are no second-class citizens, and everyone’s human rights are respected, said the UNAIDS chief.

“AIDS cannot be beaten while marginalized communities (such as the LGBTQI community, people who inject drugs and sex workers) live in fear of the state or of socially sanctioned violence and abuse”, said Ms. Byanyima.