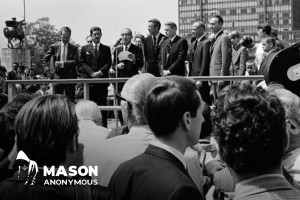 It was a sunny day on 13 August, 1969, when the first men to land on the moon appeared in the main plaza of the UN General Assembly building, welcomed by the Secretary General at the time, U Thant, as “three great pioneers” on behalf of the entire human race.

Standing on a special outdoor podium, notably lacking any women in the front row, the Burmese UN chief – the first non-European to hold the position – hailed the heroes of the United States’ Apollo 11 moon landing programme as having “already taken their place in that select roster of men, who down through the centuries have demonstrated the power of man’s vision, man’s purpose, and man’s determination.”

He told the crowd of delegates, diplomats, UN staff and journalists gathered there, that the whole human race had been able to share in their “great achievement” with everyone who had watched or listened, participating in a truly “unique moment in history”.

Watching the astronauts walking on the moon had “helped us vicariously to satisfy the age-old longing to get away from it all”, he quipped and the extraordinary  flight, moonwalk and return to earth had “brought to us a renewed realization of what we, as members of the human race, can accomplish on this planet, with our resources and our technology, if we are prepared to combine our efforts and work together for the benefit of all mankind.

#DYK that #Apollo11 astronauts left a plaque on the #Moon noting the #peaceful nature of the mission? #UNOOSA promotes the peaceful uses of #OuterSpace e.g. through the 5 international space-related treaties https://t.co/SrOK6RxQ8W #Apollo50th #MoonLanding pic.twitter.com/BdauEbFoMd

Building on the theme of the power of collective effort, exemplified by the UN Charter, the Secretary-General said it was “particularly gratifying to me, that the plaque which the astronauts placed on the moon is inscribed: ‘we came in peace for all mankind’. The words are few, but they spell out the common identity of all the inhabitants on this planet and our never-ending search for peace”.

Taking the microphone, Commander Neil Armstrong, who uttered the immortal words “The Eagle has landed” as the lunar module touched down on the surface, addressed the crowd to warm applause as: “Distinguished representatives from the planet earth”.

He said it was “with great pride that we accept the honour of having the opportunity of seeing your warm smiling faces today” accepting on behalf of all the hundreds of dedicated scientists and NASA professionals involved in the Apollo programme, “your gracious words”.

His closing remark that day, was an eloquent testimony to the scale of their achievement, and the ambition of the whole United Nations: “I can tell that you share with us, the hope that we citizens of earth, who can solve the problems of leaving earth, can also solve the problems of staying on it”.

The astronauts brought an exact replica with them to the UN of the plaque left on the moon’s surface by them, engraved with the words: “Here men from the planet Earth set foot upon the Moon, July 1969. We came in peace, for all mankind.”

Another treasured memento of the Apollo mission, stored at UN Headquarters, ins a sample of lunar rock, gifted by former US President Richard Nixon, on July 20, 1970 when the international community celebrated the first anniversary of the lunar landing.

The three astronauts returned once more that day, to participate in a ceremonial handover of the moon relic.

Listen below to the address from UN chief U Thant, and Neil Armstrong, as the three astronauts and their familes were honoured at UN Headquarters in August 1969. Audio courtesy of our UN Audiovisual Library.