“On the morning of the invasion I left my apartment and spent almost a month in a basement on the outskirts of Mariupol, until I escaped on 23 March.

The first few days felt like a weird slumber party, just getting together with friends. We had everything we needed…until we didn’t.

First the electricity went, when Russia bombed the city’s electrical system. Laptops and cell phones began to run out of battery.

Then the Russians targeted the water system. We filled up all the buckets we possibly could while the taps were still running, but we quickly realized that a lack of drinking water would be a huge problem.

And then we heard a large blast, and the gas went out, which meant gathering and chopping wood, and cooking on open fires outside the basement entrance.

‘People jumped to their deaths’ 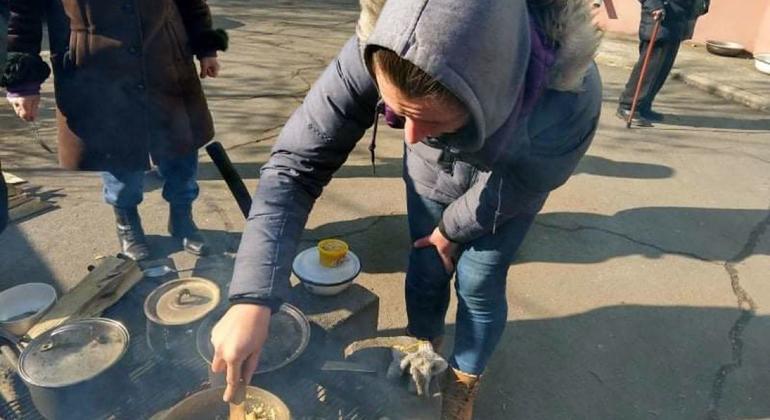 By the end of the second week, we heard continuous shelling approaching from the northern part of the city, targeting residential districts near us. Two missiles hit a nine-storey building on the other side of the road, right across from our basement. We saw the fourth floor engulfed in flames and people jumping to their deaths.

Whenever a missile landed close by, it felt like it was going straight through us. We would feel the shockwaves; the cracks in the basement wall and floor would widen with every single hit, and we would wonder if the foundations of the building could take it.

© Alina Beskrovna
Alina Beskrovna said she witnessed people jumping to their deaths from an apartment building in Mariupol, Ukraine.

‘I don’t know if my father is alive’

Early in the invasion, a communication station behind one of the residential high-rises was targeted by the Russians.

I knew why it was being done: To leave us completely helpless and hopeless, demoralized, and cut off from the outside world.

I lost contact with my father.  He was on the other side of the city and I was not sure if I would ever see him again. I only hoped that he would walk over to us, since he knew the address, but he never did. I still don’t know if he’s alive. I don’t know if he was taken to Russia by force.

Rumours began spreading about how the city had fallen, how it was now Russian territory. We heard horrific stories of Chechens roaming the streets, raping women, killing civilians at point blank range, and how dangerous it was to even try to leave because of active fighting on all three sides of the city.

So, no one dared to escape. Because of the lack of communication with the outside world, it felt as if there was a huge mass murder taking place right around me, and that the world had no idea, and would never find out the true scale of what was happening.

I had two main fears. One was rape – which is used as a weapon of war by the Russian military, and we all knew this – and the second one was being either taken to Russia by force or to the so-called Donetsk People’s Republic.

I also worried about Mariupol being proclaimed as part of the Donetsk People’s Republic – barring any hope of my leaving.

I just kept thinking, will they let us out? Is there a way out?

An opportunity to escape

Anyone who didn’t get out in the first three or four days, was unable to leave afterwards, because of active fighting and Russian forces approaching the city from all three sides.

Those who tried to flee found themselves in a battlefield.

All we could do was wait for a possible corridor to open up. Around the second week of the war, a rumour spread on a Russian Telegram [social media platform] channel, that an organized column was gathering at the theatre, heading west towards Manhush.

Everyone who had a vehicle and enough fuel, put some white pieces of cloth on their side mirrors to signify that they were civilians trying to flee, and went to the collection point.

But there was nothing. It turned out to be a false rumour.

By 20 March, the Russians has completely taken over the strip of land by the Azov Sea, from Berdyansk and Manhush, all the way to the outskirts of Mariupol.

Three days later we decided to leave despite reports of civilians being targeted, as the city was being under siege by carpet and precision bombings.

I saw with my own eyes how they aimed at apartment buildings, as if they were playing a computer game.

We were running out of food and water. I hadn’t had a shower for a month.

© Alina Beskrovna
Residents who stayed in Mariupol shared a pit latrine as the city continued to be bombed.

At 7:00 AM on the morning of 23 March, we started out for Zaporizhzhia. After 16 Russian checkpoints, a trip that usually took three hours cost us more than 14.

The drive itself was horrific. The Russian military strip-searched us, checking documents and detaining every male. But once we reached the Ukrainian checkpoint near the entry to Zaporizhzhia, we heard the Ukrainian language.

Despite feeling as though I was getting out of this black hole of destruction and death, Zaporizhzhia itself wasn’t safe; there were constant air raids.

But we had made it out of Mariupol and couldn’t believe we were alive.