Mr. Ahmad, a recipient of the International Beethoven Prize for Human Rights in 2015, became known around the world for a video in which he played piano, surrounded by children, amidst the rubble of the Yarmouk refugee camp.

Today, he is still living in Germany with his wife and two children, giving online piano lessons in his free time due to restrictions because of Covid-19, but dreams of being able to visit Syria, and bring some joy to the children in Yarmouk.

A map in our hearts 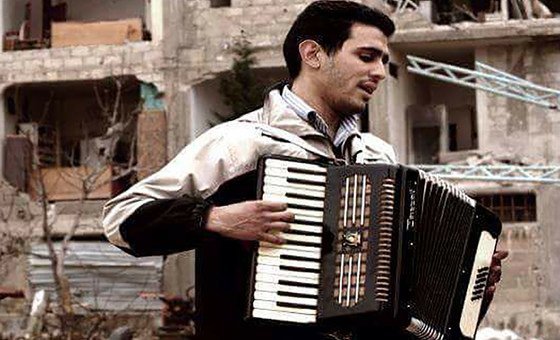 Music has helped me to cope with my situation: it transcends language. The German language is very difficult, and you need to speak it if you want to work, but thanks to music I was able to play in a concert five days after I arrived here.

Statelessness is an issue for me and every Palestinian: Palestinian refugees, whether they’ve come to Germany from Syria, Jordan or Lebanon, are classed as stateless.

After nine years of war, people have forgotten the Yarmouk camp and Syria. Many Europeans say that the refugees should be returned, but Syria is not a safe country for us: my brother has been detained since the beginning of the war, and we still know nothing about his fate.

Since living here, my family and I are like trees torn from their roots. Of course, I am happy that I escaped from ISIS, but we are dying a slow death.

COVID ‘having a greater effect than the war’

In a way, the pandemic is having a greater effect than the war: in Syria, I could play, and organise concerts. Then, when I first came to Germany, it was even easier, and during the first four years I must have played more than a thousand parties.

Thankfully, the authorities in Germany have supported artists financially since the pandemic. I have some concerts planned during November and December, and a small number of people, around thirty, will be allowed to attend.

My children, Ahmed and Kinan, love music a lot and they play, but I do not force them: my father made me practice for four hours a day, and I couldn’t play with other children. They love the piano, and sometimes I give concerts in their kindergarten and school. But if they want to train professionally, I will not teach them, I will send them to a friend or to a school near here.

‘I want to return, to play in the camp’

If I could play anywhere in the world, I would choose to return to Syria and play in the camp. This is the best musical experience I can think of. Lots of friends ask why I don’t want to play in the US, but the atmosphere in the camp concerts was like nothing else! It was beautiful.

My wish for 2021 is that all the refugees on the Syrian border, or in other camps, will have a better life. I hope that the universal language of my music shows that we are not Germans, Americans, Palestinians or Syrians: we are all humans.