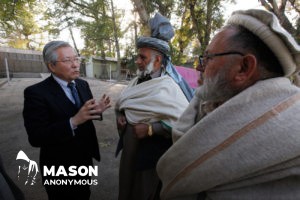 “The violence this week across Afghanistan underscores the urgency of ending the conflict through a negotiated settlement. The suffering of the Afghan people must end,” said Tadamichi Yamamoto, who heads up the UN Assistance Mission in Afghanistan (UNAMA), in a statement released on Tuesday.

One attack occurred on an international housing complex in the capital Kabul on Monday, killing at least 16 people, according to media reports; this followed two major blasts in the cities of Kunduz and Baghlan over the weekend.

Residents near compounds housing foreign staff are demanding international groups be moved to other locations, being that even aid organizations have been targets of deadly blasts.

One local man told the Reuters news agency: “This isn’t once or twice, it’s the fourth or fifth time, all by the Taliban. A lot of my friends, a lot of my family have been wounded or killed.”

“Meaningful steps must take place now to obtain an immediate and nationwide halt to violence. The United Nations stands ready to help.”–UNAMA chief

Mr. Yamamoto said that the UN “remains concerned about the harm caused to civilians by the impact of pro-Government aerial and search operations,” referring to aerial operations on 31 August in Afghanistan’s Faryab province, that left 12 civilians dead and five others injured, the majority women and children.

The spasm of violence could jeopardize months of progress made on a peace deal between United States and Taliban negotiators, with the extremist group reportedly explaining that Monday’s bombing on Kabul’s Green Village, home to several international organizations, was retaliation for attacks by US-backed Government forces.

With elections due to take place next month, “now is the time to seek unity and solidarity,” Mr. Yamamoto stressed, highlighting that security across the country during these times “is an urgent priority.”

“As I have said repeatedly,” the UNAMA chief continued, “the ultimate objective in Afghanistan must be a negotiated intra-Afghan settlement to the conflict. Meaningful steps must take place now to obtain an immediate and nationwide halt to violence. The United Nations stands ready to help.”

UNAMA has tracked nearly 100,000 civilian casualties in Afghanistan since the agency began keeping count in 2009, with 1,500 recorded in July of this year alone.

Earlier this month, as Afghanistan marked 100 years of independence, Mr. Yamamoto expressed hope that September’s planned elections would give voice to the people, and act as “a real possibility for breakthroughs in peace.”

Following the mass bloodshed of recent days, he called for solidarity: “I urge all parties here in Afghanistan and abroad, to seize any opportunity for peace and come together in meaningful negotiations,” the mission chief stressed.