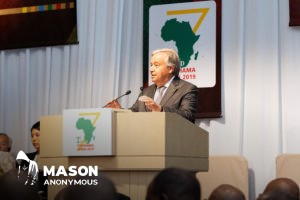 “I see Africa as a dynamic continent of opportunity where winds of hope are blowing ever stronger,” Mr. Guterres expressed.

Since the last conference in 2016, Africa has seen advancements in areas from sustaining growth, to strengthening governance, to promoting gender equality, the UN chief reported, explaining the potential for technology to work as a catalyst in the continent’s developmental efforts.

“Technology and innovation are central to unleashing Africa’s vast potential for the shared vision of leaving no one behind,” the Secretary-General said, highlighting the theme of this year’s meeting.

Since its launch 26 years ago, the summit-level meeting “has evolved into an open, inclusive and multilateral forum” Mr. Guterres said, stressing the critical role of TICAD in drawing international attention and support for the continent.

“TICAD 7 may provide tremendous impetus to help Africa harness the power of technology and innovation for its sustainable development,” he said, calling for international collaboration in maximizing the use of modern tools.

The UN chief stressed the importance bridging communications gaps to and within African countries in the digital era, noting this falls under the umbrella of the African Continental Free Trade Agreement, a milestone treaty which entered into force on 30 May.

He said facilitating trade will reduce the cost of doing business, improve the continent’s competitiveness and overall potential, adding that priority must also be given to nurturing education.

“A lack of sufficient investment in education in science, technology, engineering and mathematics can hold back Africa’s growth and deprive its youth of opportunity,” the Secretary General said.

Mr. Guterres also urged for collective efforts to address “the growing climate emergency,” noting that while Africa is minimal in its contributions to the scourge, “it is in the first line of suffering its dramatic consequences.”

In the way of partnerships, the United Nations, Africa and the African Union have made “a quantum leap” in strategic cooperation, the UN chief said, with both entities working in tandem to implement the “complementary and mutually supportive” African Union’s Agenda 2063, and 2030 Agenda for Sustainable Development.

“Africa needs peace for its development” the Secretary-General said in closing.

“I look forward to productive discussions over the next days that will culminate in a common understanding of the priorities for common and coherent action to promote peace and sustainable development across Africa.”