“Abdulla Shahid’s longstanding diplomatic experience, including in his current role as Minister of Foreign Affairs, has given him a deep understanding of the importance of multilateralism in addressing today’s global challenges”, said Secretary-General António Guterres.

The result of the election for the President of the 76th session of the UN General Assembly..#UNGA 🇺🇳 pic.twitter.com/kKZTXo3LsK

He commended the President-elect for his “selection of hope as the central theme in his vision statement” and noted that, coming from a small island developing State, Mr. Shahid will “bring unique insights” to the Assembly as the world prepares for the UN climate conference, COP26, in Glasgow in November.

“I also want to express my deep appreciation to His Excellency Dr. Zalmai Rassoul and thank him for contributing to this dynamic process”, added the UN chief.

During the meeting, the Secretary-General also drew the lots to determine the Member State that will occupy the first seat in the Assembly Hall in September, which went to Suriname.

The top UN official also expressed his “deep appreciation” to Volkan Bozkir for his “exceptional leadership” as Assembly President during the 75th anniversary session.

“As our most representative organ, the General Assembly is the foundation of all our work at the United Nations, and essential to our effectiveness as an Organization”, he said. “In 2021, the world needs that effectiveness more than ever”.

On 6 May, Mr. Bozkir had convened informal interactive dialogues in the General Assembly Hall – as mandated in resolution 71/323 – in which the candidates responded to the questions submitted earlier by civil society and other representatives.

“I wholeheartedly congratulate the Honourable Abdulla Shahid on his election as the next President of the UN General Assembly”, said the incumbent President, reminding that the President-elect has been “a strong voice” for the small island developing States.

The outgoing President also recognized “the strong candidacy” of Mr. Zalmai Rassoul, saying that his “extensive experience in multilateral diplomacy” and “comprehensive vision” has “earned the respect of Member States”.

“At this important time in his country’s history, the international community’s support for Afghanistan’s long journey towards democracy is as essential as ever”, said Mr. Bozkir, extending his best wishes to Mr. Rassoul’s continued success as Afghanistan’s Ambassador to the United Kingdom.

UN Photo/Loey Felipe
Volkan Bozkir (centre), President of the 75th session of the UN General Assembly, greets Abdulla Shahid, Minister for Foreign Affairs of the Republic of Maldives and President-elect of the 76th session.

A world in mourning

The UN chief said that millions of people are mourning the losses of loved ones to the COVID-19 pandemic in a crisis that has “dealt a body blow to communities, societies and economies”.

“Until everyone, everywhere has access to vaccines, it continues to pose an enormous threat”, he stressed.

The 76th Assembly will “grapple with the impact of the pandemic across the three pillars of our work: peace, sustainable development, and human rights”, said Mr. Guterres, wishing Mr. Shahid “every success in his task”. 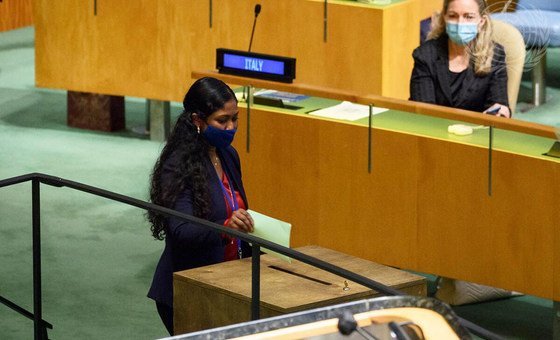 The UN chief closed by offering the President-elect his “full support” and that of “the entire Secretariat” in reaching shared goals and upholding universal values.

Meanwhile, messages of support and congratulations echoed across social media, including from the World Health Organization (WHO) chief Tedros Adhanom Ghebreyesus, who said he looked forward to working with Mr. Shahid “to end the COVID19 pandemic and towards health for all”.

The chairs for the six Main UN Committees were also elected.

Omar Hilale of Morocco will head the First Committee, which deals with disarmament; Vanessa Frazier of Malta will chair the Second Committee on Economic and Financial matters; and Djibouti’s Mohamed Siad Doualeh will lead the Third Committee, which covers human rights, humanitarian affairs and social matters.

Chairing the Fourth Committee on Special Political and Decolonization will be Egriselda Aracely González López of El Salvador; Mher Margaryan of Armenia will head the Fifth Committee on administrative and budgetary matters; and Alya Ahmed Saif Al-Thani of Qatar will lead the Sixth Committee, charged with international law and other legal matter.