The current holder of the UN’s top job, António Guterres, has sent the Peruvian diplomat – the first and only Latin American so far to lead the UN – a letter of congratulations at reaching his centenary year.

“It is with tremendous pride and joy that I extend my very best wishes as you celebrate your 100th birthday…I have often reflected on your example and experience for inspiration and guidance”, said Mr. Guterres. 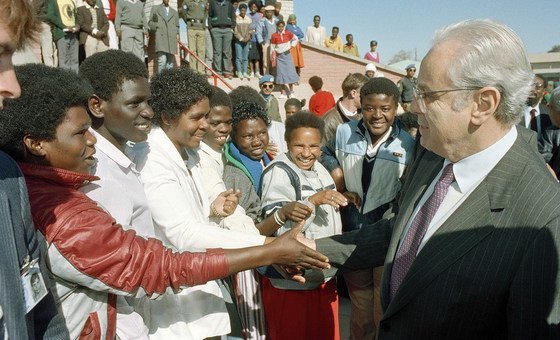 Mr. Perez de Cuéllar was born in the Peruvian capital Lima on 19 January 1920, and held a number of ambassadorships for his country, including Switzerland, the then-Soviet Union, Poland,Venezuela and also served as UN Permanent Representative. He was also appointed to senior UN roles in Cyprus, and Afghanistan.

In 1982, his 10 years at the helm of the Organization began with intense negotiations between the United Kingdom and Argentina over the disputed sovereignty of the Falkland Islands/Malvinas, and came to a close in 1991 with, as Mr. Guterres put it in his letter, “the historic El Salvador peace accords.”

“You can be assured that I speak for everyone in the United Nations in expressing our gratitude for your many contributions as Secretary-General during a period that encompassed both the Cold War and a new era that opened doors for the Organization to be ever more active”, he said.

“Your life has spanned not only a century but also the entire history of the United Nations dating back to your participation in the first meeting of the General Assembly”, he added.

With the UN now at the start of its own landmark 75th birthday year, “we who work at the Organization today strive every day to build on your impressive legacy”, Mr. Guterres concluded.